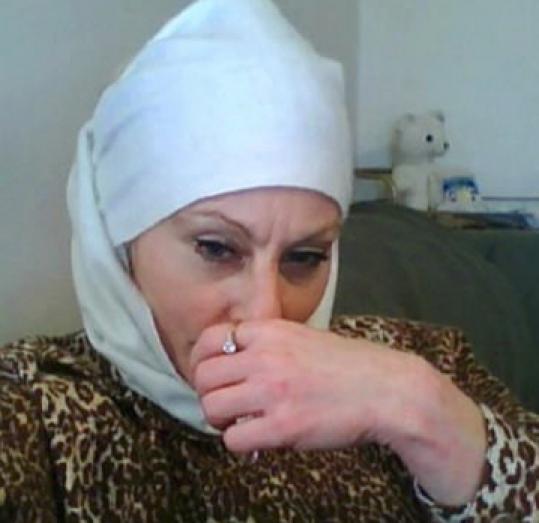 Though she apparently never joined a mosque, Colleen R. LaRose had by 2008 declared herself "desperate" to help Muslims in a video, prosecutors say.
By Maryclaire Dale Associated Press / March 19, 2010

PHILADELPHIA — A Pennsylvania woman accused of trolling the Internet as “Jihad Jane’’ denied in court yesterday that she sought to kill a Swedish artist targeted by radical Muslims or agreed to marry a terrorism suspect to help him get travel documents.

Colleen R. LaRose, 46, of Pennsburg smiled at her public defenders when she entered the federal courtroom for her arraignment. The judge set a May 3 trial date on charges in the four-count indictment.

LaRose was accused of conspiring with fighters overseas and pledging to commit murder in the name of a Muslim holy war, or jihad. She was arrested Oct. 15 while returning to Philadelphia from Europe and remained in federal custody during an investigation.

US Representative Charles Dent, a Republican from Pennsylvania, said he learned through meetings with the FBI and other briefings that LaRose had been cooperating with authorities pursuing the international probe. LaRose lived in his district.

The indictment was filed March 4 and made public five days later after authorities rounded up seven terror suspects in Ireland. Those suspects are linked to LaRose, according to a US official not authorized to discuss the case who had spoken previously on the condition of anonymity.

At the brief hearing, LaRose pleaded not guilty to conspiring to aid terrorists, conspiring to kill someone overseas, lying to the FBI, and stealing her former boyfriend’s passport.

Authorities were on her trail as early as July 2009, when the FBI interviewed her about more than a year’s worth of online posts and messages, including a 2008 YouTube video in which she said she was “desperate to do something’’ to ease the suffering of Muslims.

She denied to agents that she had used the screen name “Jihad Jane’’ or had sent any of the messages recovered, which included fund-raising appeals for the jihadist cause, according to the indictment.

The suspects detained in Ireland include Jamie Paulin-Ramirez, 31, a Colorado woman whose mother said she talked about jihad with her Muslim stepfather, according to the US official.

LaRose had left the United States for Europe on Aug. 23, though her specific destination has not been revealed.

LaRose’s live-in boyfriend of five years, Kurt Gorman of Pennsburg, did not attend the hearing. Gorman has said that he knew nothing of her interest in Islam and that she disappeared without saying a word.

LaRose spent most of her life in Texas, where she dropped out of high school, married at 16 and again at 24, and had been arrested for a few minor crimes, records show.

After a second divorce, she followed Gorman to Pennsylvania in about 2004 and began caring for his father while he worked long hours. In 2005, she swallowed a handful of pills, later telling Pennsburg police she was upset over the death of her father — but did not want to die, according to the police report.

As she moved through her 40s without a job or any hobbies, Gorman said, she started spending more time online.

Though he did not consider her religious, and she apparently never joined a mosque, LaRose had by 2008 declared herself “desperate’’ to help Muslims in the YouTube video, prosecutors say.

“In my view, she sort of slipped sideways into Islam. . . . There may have been some seduction into it, by one or more people,’’ said Frank Farley, a Temple University psychologist.

LaRose and Gorman shared an apartment with his father in Pennsburg, an hour northwest of Philadelphia. Just days after the father died in August, she stole Gorman’s passport and fled, according to the indictment.

From June 2008 through October 2009, LaRose, who also allegedly called herself “Fatima Rose,’’ went online to recruit male fighters for the cause, find women with Western passports to marry them, and raise money for the holy war, the indictment charged.

The South Asian man she had agreed to marry told her in a March 2009 e-mail to go to Sweden to find the artist, Lars Vilks, the indictment said.

“I will make this my goal till i achieve it or die trying,’’ she wrote back, adding that her blonde, blue-eyed, all-American looks would help her blend in.