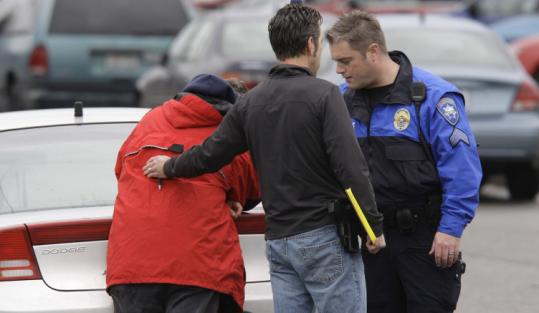 TACOMA, Wash. - A man apparently infatuated with a special education teacher fatally shot her as she walked into her elementary school yesterday, shortly before students began arriving.

The suspect was killed in a shoot-out with a deputy a short time later about 10 miles away, said Pierce County sheriff’s spokesman Ed Troyer.

The man had been released on bail Monday after being arrested a week ago for allegedly violating a protective order that the teacher, Jennifer Paulson, obtained in September 2008, Tacoma police spokesman Mark Fulghum said.

The victim’s father, Ken Paulson, said she was kind and loving, and that’s probably why she was a special education teacher. He described the 30-year-old as a devout Christian.

The father said the man who killed his daughter was Jed Waits of Ellensburg. The two had apparently known each other since she was in college, when they worked together at a cafeteria at Seattle Pacific University.

Ken Paulson said his daughter hadn’t heard from Waits for years after she graduated, and then he called her parents’ house looking for her. He had been bothering her for some time, but Fulghum said he didn’t know specifically what prompted the woman to obtain the protective order.

Fulghum said their relationship was unclear, but it “sounds like he had a pretty good infatuation with her.’’

Waits found out where Paulson worked and would show up there from time to time, her father said.

She saw him as she was leaving work last Friday and called 911 from her car. Watts was arrested Friday night, and after he made bail, Paulson stopped staying at her home, at least temporarily, her father said.