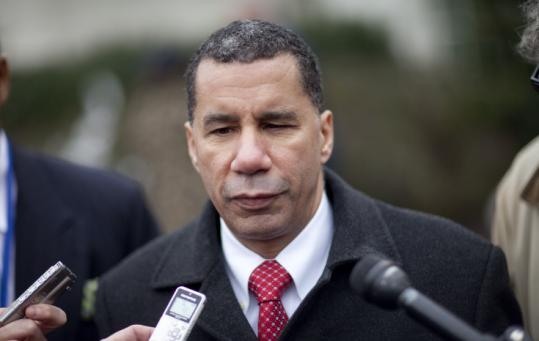 NEW YORK - Despite calls from leading Democrats to step aside, Governor David Paterson said last night that he will not drop his election bid amid a growing scandal surrounding accusations of domestic violence against a key aide.

The governor said he will speak to key New York Democrats about his future, but for now he is continuing his campaign. Paterson rose to the post in 2008 when Eliot Spitzer resigned in a prostitution scandal.

Paterson also said he will cooperate fully with a state attorney general’s investigation into contact his administration had with a woman who accused aide David Johnson of domestic violence. No criminal charges were brought after the Halloween confrontation.

“I’m not suspending my campaign, but I am talking to a number of elected officials around the state . . . to hear their opinions,’’ Paterson said.

Asked whether he would withdraw if fellow Democrats asked him to, Paterson responded: “I’ve got an open mind about this thing. I want the Democrats to win in November.’’

Paterson’s made his comments after a day of developments surrounding Johnson and any possible role the administration and State Police played after the Halloween confrontation.

Paterson’s top criminal justice Cabinet member resigned over the scandal, saying conduct by the State Police was distressing for an administration devoted to reducing domestic violence.

Paterson’s office has not made Johnson available for comment.