Guard troops wait for back pay 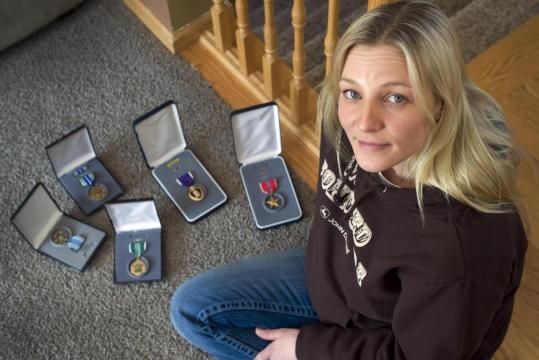 Staff Sergeant Katie Blackwell of Minnesota, seen with medals she was awarded, estimated she and her husband, also a soldier, together are owed $8,000 in post-deployment paid time off. (Craig Lassig/Associated Press)
By Martiga Lohn Associated Press / February 18, 2010

ST. PAUL - Thousands of National Guard soldiers who served extra-long deployments in Iraq, Afghanistan, and other conflicts were supposed to get paid time off when they came home three years ago.

Now, they might finally be about to get their money after years of frustration.

An Army spokesman said yesterday that 6,800 Army National Guard soldiers are in line to receive the tardy checks. Among those still waiting: About 2,500 of Minnesota’s Red Bulls with the 34th Infantry Division, who served the longest tour of any military unit in Iraq as part of the 2007 troop surge. A Minnesota Guard spokesman said that group should get $10 million.

Staff Sergeant Katie Blackwell of Champlin, Minn., who spent 16 months in Iraq as part of a nearly two-year deployment with the Minnesota Red Bulls from 2005 to 2007, estimates she and her husband, also a Guard soldier, together are owed $8,000.

“We’ve been overseas to fight for our country. When I came home, I didn’t expect to have to fight on the home front,’’ she said.

The Pentagon’s fix comes after intense pressure from members of Congress and as Minnesota legislators were considering appropriating state money to make up for the unpaid federal dollars. The Pentagon didn’t announce when the soldiers would be paid, but Representative John Kline, a Minnesota Republican, said Defense Secretary Robert Gates’s office told him the checks will go out by March 19. A spokeswoman in Gates’s office referred a question about the timing of payments to the Army. An Army spokesman, Major Tim Beninato said the timing would vary depending on how quickly states return lists of qualifying soldiers.

Since the Iraq war started in 2003, the military has relied heavily on National Guard and Reserve troops, sending them into combat more frequently and for longer tours than ever before.

The soldiers were promised the paid leave, called Post Deployment Mobilization Respite Absence, for deployments that lasted more than a year. The program also recognized frequent deployments. Beninato said Army National Guard soldiers earned the leave at a rate of $200 a day.

The US Department of Defense started the program in January 2007. The benefit was easy to give to active-duty troops, but there was no policy created to pay Guard and Reserve members until August 2007. Guard and Reserve troops who returned between Jan. 19 and Aug. 18, 2007, fell into a gap, and the military didn’t have authority to pay them retroactively until Congress changed the law in October 2009.

“In this case we called up all these members of the reserve component, mobilized them, sent them to a combat zone, extended them, and they should be compensated for that,’’ Kline said.

The Army National Guard soldiers were the largest group eligible for the paid leave, but the program applied to all branches of the military. An Army Reserve spokesman, Lieutenant Colonel Bernd Zoller, said officials there are still calculating how many reservists are eligible for the back pay. Officials with the Navy Reserve, Marine Forces Reserve, and Air Force Reserve could not immediately answer questions from AP about the number of eligible troops.

The delay so frustrated two Minnesota state lawmakers that they introduced legislation to pay the soldiers and seek reimbursement from the federal government. Minnesota faces a projected $1.2 billion budget shortfall over the next 17 months.