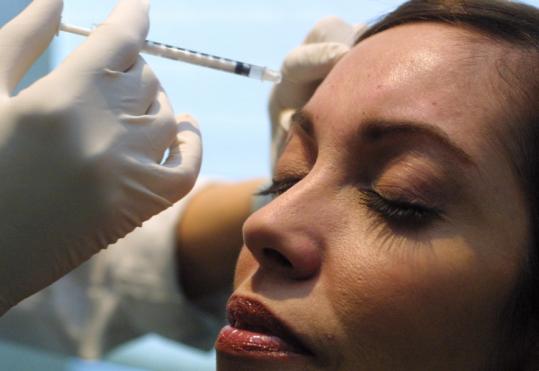 NEW YORK - Botox, given in the doses used to reduce facial wrinkles, may reduce certain kinds of migraines that patients describe as crushing or “eye-popping’’ more than other types, a study found.

Patients who responded to Botox reported that their migraines were reduced to fewer than one day a month from almost seven, according to a study of 18 people published Monday in the Archives of Dermatology. The researchers said that people with migraine pain categorized as “imploding’’ - like a vise tightened around the head - were helped more than those who described their migraine pain as “explosive.’’

Medical trials have reported inconsistent data on how much Botox helps reduce migraine pain, the researchers said. , a pharmaceuticals firm based in Irvine, Calif., has filed for approval with the Food and Drug Administration to market Botox as a treatment for chronic migraines, which affect about 3 million Americans, company spokeswoman Crystal Muilenburg said.

“This could revolutionize the way people with these migraines are treated,’’ said one author of the study, Jeffrey Dover, an associate clinical professor of dermatology at Yale School of Medicine. “It was the imploding headaches that responded, and the ocular headaches,’’ Dover said. “They required little to no pain medication for headaches in the months after their Botox treatment.’’

The study was funded in part by Allergan and the National Institutes of Health.

Botox, a purified form of the poison botulinum, is administered by doctors as an injection. It is approved as a short-term treatment to smooth wrinkles in facial skin by temporarily paralyzing the muscles underneath.

Researchers don’t know how Botox works to stop migraine pain, said study co-author Rami Burstein, a professor of anesthesia at Harvard Medical School. The drug may block the signals in sensory nerves on the outside of the head that may cause the migraines called imploding and ocular, he said.