In Kirk’s farewell, a call for return to unity of Kennedy era 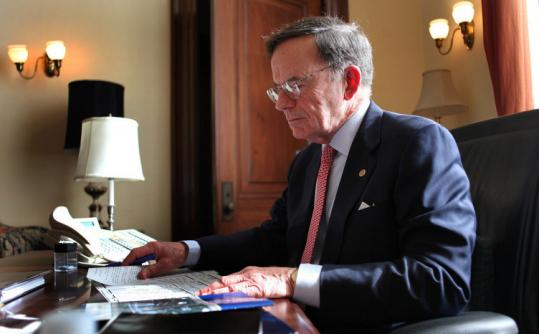 WASHINGTON - Paul Kirk said a poignant goodbye yesterday to the Senate, invoking the memory of the man he briefly replaced, Edward M. Kennedy, as he implored his colleagues to adopt Kennedy’s bipartisan spirit and get to work on fixing the nation’s problems.

But the Senate Kirk holds dearly in his memories no longer exists, the Massachusetts Democrat lamented as he completed his last day in office. And the audience for his farewell Senate address provided a brutal punctuation for his remarks: not a single Republican, senator nor staff worker, showed up.

“With the results from Massachusetts, much has been made of the fact that the numbers have changed in the US Senate. It is true. The numbers have changed. But the American people are asking a more important question: Will anything else change?’’ Kirk asked his colleagues, standing for the last time behind the desk Kennedy used for nearly 47 years.

“Will the Democratic majority, despite its still solid numerical advantage, be forced to cling to a 60-vote strategy as the only path to forward progress?’’ he continued. “Will the Republican minority misread the results from Massachusetts as vindication of a strategy to ‘Just say no’ to any measure proposed by a Democratic president of the United States or by their colleagues on this side of the aisle?’’

Democratic lawmakers, including Bay State Representatives William Delahunt of Quincy, Edward Markey of Malden, and Stephen Lynch of Boston, lined up to hug Kirk and wish him well. Senator John F. Kerry of Massachusetts lauded Kirk’s service but was distressed by the absence of GOP colleagues in the time-honored Senate send-off.

“We, I think, were part of a Senate a number of years ago where that just never would have been the case,’’ Kerry said. “So it is what it is. I hope they hear his comments.’’

Senator Chris Dodd of Connecticut - who patted the hand of Senator Patrick Leahy of Vermont when Kirk mentioned Kennedy’s family in his speech - shrugged his shoulders at the GOP no-show. “I really don’t have an answer to that,’’ Dodd said.

Don Stewart, a spokesman for the Senate’s Republican leader, Mitch McConnell of Kentucky, said there was no deliberate effort to snub Kirk. “We didn’t have a heads-up that he was about to speak,’’ Stewart said.

Senator John McCain, an Arizona Republican who has known Kirk for many years, called Kirk “a credit to his party, a fine man’’ and said he missed the speech because he found out about it too late.

More than a dozen Democratic lawmakers came by to hear the speech and praise Kirk’s tenure. Senator Jay Rockefeller of West Virginia called Kirk “an extraordinary replacement for Teddy [Kennedy]. In a sense, he was Teddy. He spent so much of his life with him. It breaks my heart to see him leave.’’

In an interview, a melancholy Kirk denounced the “raw politics in the United States Senate today.’’

The bitter partisanship, he said, hindered and frustrated him as he sought to continue, however briefly, the legacy his longtime friend had built. “I think we could say it was a very busy, active, sometimes tumultuous and too often contentious time,’’ the interim lawmaker said, sitting in his bare-walled office - the one once filled with Kennedy memorabilia and photos, and soon to be occupied by GOP Senator Scott Brown. The Senate needs “a call to reason and reasonability and bipartisanship and collaboration’’ instead of the rancor and bitterness that “I think are helping to fuel the anxiety and frustration of many people out there,’’ Kirk said.

The former Democratic National Committee chairman recalled an earlier era, when he was a member of Kennedy’s staff in the late 1960s and 1970s. Rockefeller Republicans teamed up with mainstream Democrats, while Western and Midwestern GOP senators colluded with the more conservative Southern “Dixiecrats.’’ Centrists such as Senator Charles “Mac’’ Mathias, a Maryland Republican whose funeral Kirk recently attended, would forge compromises.

And at the end of late-night budget negotiations, lawmakers on both sides of the aisle would lift glasses of Merlot to toast the successful conclusion.

Instead, Kirk left the Senate yesterday much like he found it in September: bitterly divided and paralyzed by an us-versus-them mentality.

“The United States Senate, and by that I mean each individual United States senator, must pause to answer this question: Will the majority and minority walk that path together and work together on the business of the people we represent?’’ Kirk said to his colleagues.

Asked whether he had advice for Brown, Kirk urged the incoming lawmaker to work hard, stay true to himself, and keep the door open to his Democratic colleagues. “When you’re the 100th member of the United States Senate, you’re privileged to be here and you have to approach it with a sense of humility,’’ Kirk said.

Brown should “not be intimidated by the pressures of the [GOP] caucus,’’ which will want Brown’s vote to sustain filibusters, Kirk said. “If he does that, he’ll be fine.’’