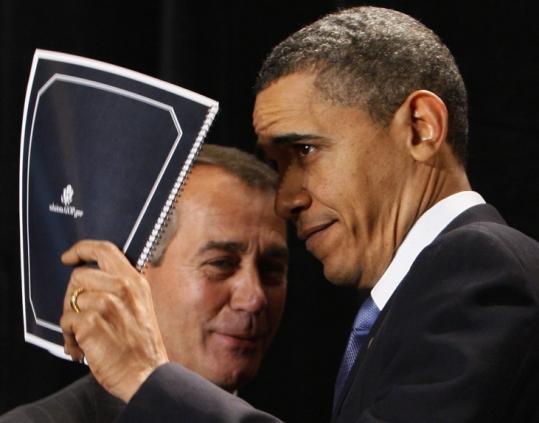 BALTIMORE - President Obama denied he was a Bolshevik, the Republicans denied they were obstructionists, and both sides denied they were to blame for the toxic atmosphere clouding the nation’s political leadership.

At a moment when the country is as polarized as ever, Obama traveled yesterday to a House Republican retreat to try to break through the partisan logjam that has helped stall his legislative agenda. What ensued was a lively, robust debate between a president and the opposition party that rarely happens in the scripted world of American politics.

For an hour and 22 minutes, with cameras rolling, they thrust and parried, confronting each other’s policies and politics while challenging each other to meet in the middle. Intense and vigorous, sometimes even pointed, the discussion nonetheless proved remarkably civil and substantive for a relentlessly bitter era, an airing of issues that both sides often say they need more of.

But if it was at times a wonky clash of ideas, it also seemed to be a virtual marriage-therapy session as each side vented grievances pent up after a year of partisan gridlock.

Obama complained that the Republicans were painting him as a radical, making it harder to compromise.

His health care plan, he said, was not “a Bolshevik plot.’’ The Republicans, for their part, complained that he did not listen to them and instead sat back while the Democratic “attack machine,’’ as one called it, demonized them.

“I am not an ideologue,’’ Obama said at one point, drawing skeptical murmurs from the crowd that seemed to surprise him. “I’m not,’’ he insisted.

“I can look you in the eye and tell you we have not been obstructionists,’’ Representative Jason Chaffetz, a freshman from Utah, told him.

The encounter at a Baltimore hotel was unlike any of Obama’s presidency, or very many other presidencies. Such a sustained and public dialogue with a hostile audience is rare for a president.

Instead, yesterday’s back-and-forth resembled the British tradition where the prime minister submits to questions on the floor of the House of Commons - something that Senator John McCain had promised to do if elected president.

For Obama, the lion’s-den strategy of addressing a Republican audience reinforced his effort in the State of the Union address this week to reclaim a more bipartisan image and reach out to disaffected independents.

Although he and other presidents have addressed opposition caucuses before, they usually close the doors for questions, but this time the White House insisted on letting the news media record the give and take.

That worked to his benefit as he took advantage of the staging that comes with being president. He commanded the lectern with the presidential seal and the camera was trained mainly on him, while his interlocutors were forced to look up to him from the audience.

Moreover, Obama gave long, confident, and informed answers and felt free to interrupt questioners, while it is typically harder for others to interrupt a president.

But Republicans said they believed they had achieved a victory as well, demonstrating that while Democrats might not like some of their policy ideas, they had advanced some proposals, as evidenced by the president’s acknowledgment that he had read them and even incorporated some of them into his initiatives.

“For him to say, ‘I have read your proposals and they are substantive proposals,’ that is a huge thing for Republicans,’’ Representative Jeff Flake, Republican of Arizona, said afterward.

Just to make the point that they have been more than the party of no, Representative John Boehner of Ohio, the House Republican leader, as he introduced the president handed him a booklet called “Better Solutions’’ compiling Republican ideas that they said the president had ignored or resisted over the last year.

“We don’t expect you to agree with us on every one of our solutions,’’ Boehner said, “but we do hope that you and your administration will consider them.’’

The meeting came just 10 days after a special election in Massachusetts cost Democrats their 60-vote supermajority in the Senate, but on a day of rare good news for Obama as the government reported that the economy grew by 5.7 percent in the final quarter of last year, the strongest rate of growth in six years.

“They didn’t send us to Washington to fight each other in some sort of political steel-cage match to see who comes out alive,’’ he said. But he was tough and even defensive at times, giving no ground on policy and five times using the phrase “not true’’ to describe Republican statements.

He argued that his health care plan was “pretty centrist.’’ “But if the way these issues are being presented by the Republicans is that this is some wild-eyed plot to impose huge government in every aspect of our lives, what happens is you guys then don’t have a lot of room to negotiate with me,’’ Obama said.