Brown to vote ‘how I want to vote’

Senator-elect sees himself as maverick 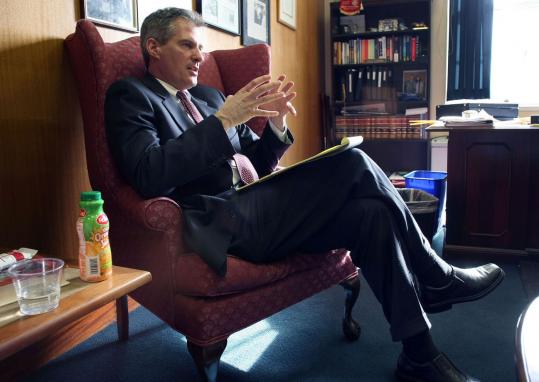 Senator-elect Scott Brown, hailed as a savior for the Republican Party, pledged yesterday that he would not always vote the party line, saying he would chart his own course in Washington.

In a wide-ranging 30-minute interview with the Globe, Brown said he told GOP Senate leaders last week: “With all due respect, I really don’t know a lot of you people, and you don’t know me. But maybe that’s good, because I’m going to vote how I want to vote.’’

“They were cool,’’ Brown said, explicitly acknowledging the political capital he carries to Capitol Hill. “They said . . . ‘You could probably do whatever you want right about now, Scott, so that’s OK.’ So they were very respectful, and they understand. They understand all eyes are on me.’’

Brown made his declaration of independence a week after his upset of Democrat Martha Coakley sent shockwaves through American politics, and as he continues to wrestle with sudden stardom.

In his trademark aw-shucks, self-effacing style, he reflected on becoming a political sensation.

“I try to just be myself,’’ he said. “Like today, I got up, I rode the bike for an hour, watched TV, read the newspapers, you know, and then spent a little time with the dogs, got them all settled up, gave [my wife] Gail a kiss and went to the gym, did a swim, and then I came in here. I’ve been meeting with you guys, I’m going to caucus. The only different thing is, I’m doing [Jay] Leno.’’

But yesterday was hardly normal for Brown, who seemed oddly out of place at the State House, treated, in a building dominated by Democrats, with a mix of newfound respect and slack-jawed amazement.

He received three standing ovations from his colleagues in the state Senate, met for 35 minutes with Governor Deval Patrick, and conducted a round of interviews in his fourth-floor office, which still contains memorabilia from previous elections (including nail files that say, “Re-elect Scott Brown State Senator’’).

In the interview, Brown said he felt the weight of his victory.

“It’s a lot of pressure, to be everything to everybody, and all I’ve been telling people is, you know, I’m a regular guy,’’ he said. “I’m hopeful that they don’t put such high expectations that I let them down.’’

He said he has started building a staff and has hired a few aides to the late Edward M. Kennedy, including Kennedy’s Boston-based immigration liaison, Emily Winterson, who helps people with their immigration cases.

“It’s huge now, especially with Haiti,’’ Brown said. “It’s the numberone issue that will affect my office, and I have the best person in place to handle it. . . . I almost cried when she said, yes, she’ll stay.’’

“Kennedy had some of the best people in the country,’’ he added. “We’re going to have a constituent office second to none.’’

Brown said he has filled about a quarter of the senatorial staff’s 28 positions in Washington and is fully staffed in Boston with about eight people. He also said he had a recent conversation with Joseph P. Kennedy II, a former congressman and a nephew of the late senator.

Brown declined to predict what his first piece of legislation would be, but said he plans to focus on four areas once in office - military, veterans, education, and disability issues - and will aim to chart a career similiar to that of Senator John McCain, his political role model and the only leader in Washington who agreed to meet with him several months ago.

“When I think of maverick, I think of ‘Top Gun,’ and then I think of him,’’ Brown said. “And how he’s just been, sacrificed so much for our country. Who better as a role model for me?’’

Brown, with an image akin to that of Jimmy Stewart in “Mr. Smith Goes to Washington,’’ has singlehandedly disrupted the Democrats’ domestic agenda and captured the national political spotlight. In addition to his appearance on Leno’s show last night, he is scheduled to appear Sunday on ABC’s “This Week’’ with guest host Barbara Walters.

“You have to have a sense of humor,’’ Brown said. “One of the things I think is wrong with Washington is they don’t kind of lighten up a little bit and have a laugh.’’

That was one of the things he said he liked about President Obama’s State of the Union address Wednesday night.

“You could tell he was genuinely having fun,’’ he said.

“We’re going to find common ground on things,’’ he said.

Asked if health care would be one of those areas, he said, “I have to see what’s there.’’

“If it’s going to be the raising of taxes and cutting of Medicare and all that stuff, the backroom deals, then no,’’ Brown said. “But the fact that he’s going to now - because of my election . . . Republicans are going to have to come to the table and he challenged them to come up with some good ideas - I think that’s good.’’

Brown is still trying to grasp the enormity of his political victory and adapt to newfound fame. Letters have poured in from around the world. Supporters have suggested designing a flag in his honor (a sun rising over a brown field). His local breakfast spot now features the Scott Brown Special: French toast, bacon, and hot chocolate for $5.95.

“It’s still the same thing I’ve always ordered,’’ Brown said. “OK, they can change the name and fluff it up, but I still go to the Y, I still wear my junky clothes, and . . . probably my gym locker still smells.’’

And yet, the guy who used to be just another face in the gym is on a different plane now.

After the interview, Brown attended a Republican caucus and later walked through the double doors into the state Senate chamber, talking on his cellphone and saying, “Text me, text me.’’

Brown told his colleagues that he hoped to carry to Washington their spirit of respect and hard work while “holding the ship in line.’’

“I want to thank you all for the opportunity to serve with you,’’ he said. “It’s something I will never, ever trade in.’’

Brown then chatted with colleagues, took a few chocolates from Republican state Senator Michael Knapik, and left to meet with the governor.

Patrick and Brown later appeared together briefly, with Patrick hailing the senator-elect’s “spirit of service’’ and Brown calling the governor “a good man with a warm heart.’’ Several minutes later, Patrick linked to a photo of the two on his Twitter account.