Scientists try to envision impact of a ‘Frankenstorm‘ 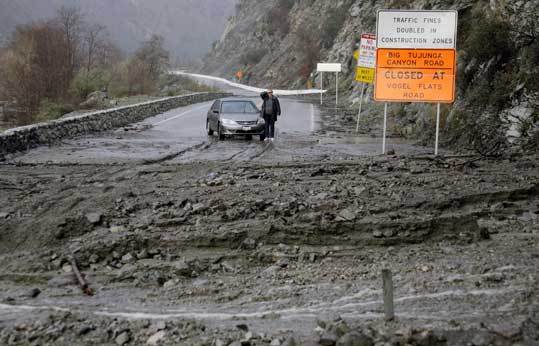 A superstorm would probably cause mudslides much worse than the one that blocked a California canyon road last week. (Reed Faxon/ Associated Press)
By Alicia Chang Associated Press / January 25, 2010

LOS ANGELES - As torrential rains pelted wildfire-stripped hillsides and flooded highways in California, a team of scientists hunkered down at the California Institute of Technology to work on a “Frankenstorm’’ scenario - a watery blast that could potentially sock the Golden State.

The hypothetical but plausible storm would be similar to the 1861-1862 extreme floods that temporarily moved the state capital from Sacramento to San Francisco and forced the then-governor to attend his inauguration by rowboat.

Weather researchers say West Coast storms could get more frequent and severe with climate change. The new storm model “is much larger than anything in living memory,’’ said project manager Dale Cox with the US Geological Survey.

In the scenario, the storm system forms in the Pacific and slams into the West Coast with hurricane-force winds, hitting Southern California the hardest. After more than a week of ferocious weather, the system stalls for a few days. Another storm brews offshore and this time pummels Northern California.

Such a storm could unleash as much as 8 feet of rain over three weeks in some areas, said research meteorologist Martin Ralph with the National Oceanic and Atmospheric Administration, who is part of the project.

That dwarfs the latest Pacific storm system, a weeklong siege of storms that walloped California, dumping as much as a foot of rain in the mountains, flooding coasts and roads, and forcing evacuations.

Last fall, a team of federal, state and academic officials was formed to tackle what would happen if a series of powerful storms lashed at the state for 23 days. The scenario is expected to be completed this summer and will be used in a statewide disaster drill next year.

Ironically, the team had scheduled meetings at Caltech to discuss the fictional storm’s impact to dams, sewage treatment plants, transportation, and the electrical grid. About a dozen members canceled due to the weather.