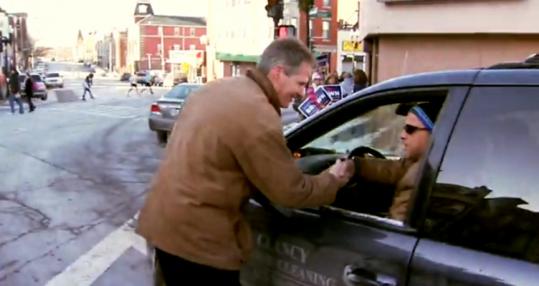 With the special election set for Tuesday, both Scott Brown's (above) and Martha Coakley's campaigns have stepped up ad spending. (Scott Brown)
By Jenn Abelson and Johnny Diaz Globe Staff / January 17, 2010

Tuesday’s election may be too close to call, but the media will be the clear winner, after nearly $5 million for campaign advertisements poured into local TV and radio stations in the final days of the US Senate race.

It’s an unprecedented deluge of spending over such a short period for any political race in Massachusetts, according to media analysts and local TV station managers. The surge of back-to-back campaign spots, by Democrat Martha Coakley and Republican Scott Brown and their supporters, started last week as the race tightened and the Commonwealth became the front line of the nationwide battle over how to overhaul health care.

Now, the race to fill the late Edward M. Kennedy’s seat is proving to be a bonanza for local stations, and even newspapers, at a key time: January is typically the slowest month for media advertising revenue.

Bruce Mittman, president of Boston advertising and marketing agency Mittcom, estimates that about $4.5 million in political ads were pumped into Boston TV and radio stations in the past week alone. Even print outlets, such as The Boston Globe and the Boston Herald, which do not traditionally attract many political ads, had an unexpected boost in ads on their websites.

“This is a gigantic boom for local media,’’ said Mittman, who also is a partner in Community Broadcasters, which owns eight radio stations in New York state. “There is not enough inventory left.’’

WBZ-TV (Channel 4), WCVB-TV (Channel 5), and WHDH-TV (Channel 7) reported that they had sold out all available advertising slots through Election Day, except for a few slots in the wee hours of the morning, as of the end of last week. WFXT-TV (Channel 25) had scant inventory left over.

Chris Wayland, vice president and general manager of WHDH and WLVI-TV (Channel 56), said Channel 7 had sold out its ad inventory from Friday through Tuesday. He said WLVI has sold most of its inventory for its 10 p.m. newscasts through the special election on Tuesday.

“This has been a windfall not just for us, but the market,’’ he said. “We have never seen spending like this over such a short period of time.’’

Skip Perham, a spokesman for Comcast SportsNet and New England Cable News, said those stations had booked about 70 percent of their political advertisements by Friday. He also said Comcast SportsNet had sold out of its 30-second campaign spots for last week’s Celtics games, as well as tomorrow’s game. “It has been fast and furious,’’ he said.

All the extra political spots can add up quickly for the stations during a month that is particularly slow. Under federal election rules, stations must sell political ads to candidates for a rate lower than a typical advertiser pays. The cost per spot varies according to the station, time of day, and program during which the ad will air. But TV stations and radio outlets can charge outside groups a higher rate than candidates.

Prices for political ads on Boston TV stations during prime time are ranging between $4,000 to $10,000 per spot, according to The Ad Club of Boston.

Some of the big buys included ones by the US Chamber of Commerce - a major opponent of the Democratic health care bill - which has spent $501,000 in ads supporting Brown, a state senator from Wrentham. A Democratic group called Citizens for Strength and Security has spent $265,877, on ads supporting Coakley, the state’s attorney general, according to reports filed late last week with the Federal Election Commission.

WBZ-TV has been able to charge double and triple its normal rates to place spots during some of its prime time programs, such as “NCIS’’ and “Two and a Half Men,’’ which rank among the most watched programs in Boston week after week. “Two and a Half Men’’ was the fifth most watched show last week in Boston with 315,000 total viewers, according to Nielsen ratings service, while “NCIS’’ ranked 11th with 263,000 viewers.

“It’s really extraordinary,’’ said Ed Piette, general manager of WBZ-TV. “It doesn’t patch the deep wounds that broadcast TV has taken, but it is a temporary fix and a welcome one.’’

At WCVB-TV, Andy Hoffman, the general sales manager, said revenues from political ads are above projections, but declined to provide details. “It’s significant revenue,’’ Hoffman said. “We are wall-to-wall Coakley-Brown.’’

Besides the unexpected cash the race is bringing to local stations, the onslaught has led to the unusual phenomenon of spots running back to back as stations cram them into available air time.

“You are not seeing the standard separation between competitors,’’ said Greg Angland, a senior vice president at Blitz Media, a media buying agency in Needham. “They don’t have enough room to move them around.’’

Felix Browne, a Brown campaign spokesman, declined to comment on the campaign’s media strategy and spending.

And Corey Welford, a Coakley campaign spokesman, said the huge television ad spending “reflects a heightened interest in the race and the critical importance of this election. It began when a number of right-wing outside groups came in and launched ads on behalf of Scott Brown. And has continued right through.’’