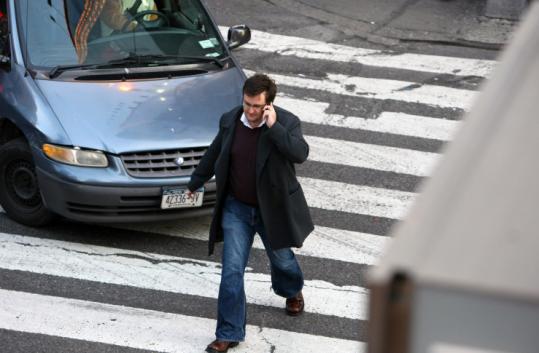 Multitasking by pedestrians is on the rise. The era of the mobile gadget is making mobility much more dangerous. (Richard Perry/The New York Times)
By Matt Richtel New York Times / January 17, 2010

SAN FRANCISCO - On the day of the collision last December, visibility was good. The sidewalk was not under repair. As she walked, Tiffany Briggs, 25, was talking to her grandmother on her cellphone, lost in conversation.

It was parked in a driveway.

Distracted driving has gained much attention lately because of the inflated crash risk posed by drivers using cellphones to talk and text.

But there is another growing problem caused by lower-stakes multitasking - distracted walking - which combines a pedestrian, an electronic device, and an unseen crack in the sidewalk, the pole of a stop sign, a toy left on the living room floor, or a parked (or sometimes moving) car.

The era of the mobile gadget is making mobility that much more perilous, particularly on crowded streets and in downtown areas where multiple multitaskers veer and swerve and walk to the beat of their own devices.

Most times, the mishaps that befall the distracted walker are minor, like the lightly dinged head and broken fingernail that Briggs had, a jammed digit or a sprained ankle, and, the befallen say, a nasty case of hurt pride. Of course, the injuries can sometimes be serious - and they are on the rise.

Slightly more than 1,000 pedestrians visited emergency rooms in 2008 because they got distracted and tripped, fell, or ran into something while using a cellphone to talk or text. That was twice the number from 2007, which had nearly doubled from 2006, according to a study conducted by Ohio State University, which says it is the first to estimate such accidents.

“It’s the tip of the iceberg,’’ said Jack L. Nasar, a professor of city and regional planning at Ohio State, noting that the number of mishaps is probably much higher considering that most of the injuries are not severe enough to require a hospital visit. What is more, he said, texting is rising sharply and devices like the iPhone have thousands of new, engaging applications to preoccupy phone users.

Nasar supervised the statistical analysis, which was done by Derek Troyer, one of his graduate students. He looked at records of emergency room visits compiled by the Consumer Product Safety Commission.

Examples of such visits include a 16-year-old boy who walked into a telephone pole while texting and suffered a concussion; a 28-year-old man who tripped and fractured a finger on the hand gripping his cellphone; and a 68-year-old man who fell off the porch while talking on a cellphone, spraining a thumb and an ankle and causing dizziness.

Young people injured themselves more often. About half the visits Troyer studied were by people under 30, and a quarter were 16 to 20 years old. But more than a quarter of those injured were 41 to 60 years old.

Pedestrians, like drivers, have long been distracted by myriad tasks, like snacking or reading on the go. But the ubiquity and constant interaction associated with electronic devices has made single-tasking seem boring or even unproductive.

Cognitive psychologists, neurologists, and other researchers are emerging to study the impact of constant multitasking, whether behind a desk or the wheel or on foot. It might stand to reason that someone looking at a phone to read a message would misstep, but the researchers are finding that just talking on a phone takes its own considerable toll on cognition and awareness.

Sometimes, pedestrians using their phones do not notice objects or people right in front of them, even a clown riding a unicycle. That was the finding of a recent study at Western Washington University in Bellingham, Wash., by a psychology professor, Ira Hyman, and his students.

One of the students dressed as a clown and unicycled around a central square on campus. About half the people walking in the square by themselves said they had seen the clown, and the number was slightly higher for people walking in pairs. But only 25 percent of people talking on a cellphone said they had, Hyman said.