Brown’s run may be model for GOP 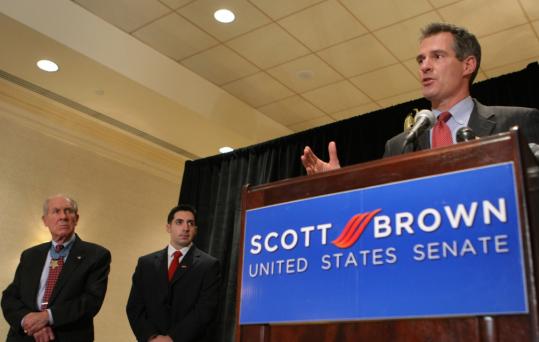 WASHINGTON - National GOP strategists say that the unexpected tightening in the Massachusetts Senate race has demonstrated the potency of the electorate’s antipathy for the Democratic health care legislation, and that Republican Scott Brown’s campaign could become a template for Republican challengers across the country in this year’s midterm elections.

“He’s making health care a front-and-center issue in the most liberal state in the country, and it’s working for him,’’ said Whit Ayres, who cofounded Resurgent Republic, a group of conservative pollsters and strategists formed to shape the national debate. “That’s the major message - that this bill is an albatross around the necks of the Democrats, and if it works this well in Massachusetts, just imagine how well it will work in less liberal states.’’

Brown has portrayed the Democratic health care bills as bloated, tax-stuffed mistakes that would do little to solve Massachusetts’ biggest health care challenge - controlling costs - while forcing its residents to sub sidize insurance for people in other states. He has called for Congress to “go back to the drawing board’’ and come up with a new plan. And he has capitalized on speculation about whether Democrats might try to delay his confirmation if he wins in order to ram the health bill through, stoking concerns about transparency and fairness raised by special deals Democratic leaders made last year to entice fence-sitters to vote for the bill.

“Threatening to ignore the results of a free election and steal this Senate vote from the people of Massachusetts takes their schemes to a whole new level,’’ the Brown campaign said in a recent statement, in a burst of rhetoric that has been typical of his camp. A spokesman for Brown declined to comment for this story.

Secretary of State William F. Galvin has said he will follow the law, which requires him to wait 10 days to certify the election to ensure the counting of absentee military ballots from military personnel stationed overseas.

GOP strategist Ed Rollins said that if Brown even comes close to defeating Democrat Martha Coakley, who just weeks ago was seen as a shoo-in, Brown’s campaign “could be viewed as a model’’ for GOP contenders nationwide, and strategists would scrutinize “what did he say, and how was he saying it.’’

Even some Republicans who had been predicting big gains in the 2010 elections can scarcely believe the seat that was once occupied by US Senator Edward M. Kennedy, a revered liberal who held it for 47 years and called universal health insurance “the cause of my life,’’ is suddenly vulnerable. This in a state whose landmark 2006 health care law became a model for the federal legislation under discussion, a law that remains popular today.

“I think Republican strategists are certainly taking note of that and saying, ‘We thought it would work in a lot of the country, but the fact it’s working in Massachusetts tells us that it will really work,’ ’’ said Rob Gray, a GOP strategist based in Boston. “The big thing is that the health care bill is a big empty vessel into which people can assign their pet peeves or anger . . . [about] how the federal government is being run and the state of the economy.’’

National polls have shown dismal support for the House and Senate health care bills, which Democratic leaders are racing to merge in talks this week. A CNN poll conducted Jan. 8-10 found 57 percent of respondents opposed to the proposals and 40 percent in favor.

Coakley has thrown her support behind the Democratic effort, arguing it would cover more than 30 million uninsured Americans, reduce the health costs burdening Massachusetts families and businesses, and absorb some of the costs of Massachusetts’ health care law that state taxpayers are currently covering.

Brown is tapping into a general dissatisfaction about the state of the country and what many view as the Democrats’ misplaced response to its problems, said Stuart Rothenberg, editor and publisher of the Rothenberg Political Report, a nonpartisan newsletter covering national politics and campaigns.

“I think the focus on health care has been so heavy for so long, and the public looks around at all these other problems and says, ‘Why the heck don’t you do something about jobs?’ ’’ he said. “It may not be Obama’s fault that the economy hasn’t rebounded, but politicians are held responsible for how people feel. I think you’ll see Republican candidates around the country just taking advantage of all this.’’

One lesson GOP challengers nationwide might take from the Brown campaign, analysts say, is to frame their complaints about the health care legislation in economic terms, rather than on health policy or ideological grounds. Brown has avoided the battle cries of last summer’s Tea Parties about a Canadian-style government takeover of health care or so-called death panels, which would probably not resonate as well in a traditionally liberal state like Massachusetts.

Instead, Brown has lumped the proposed tax increases in the health care bill together with Coakley’s support for other Democratic initiatives, such as allowing the 2001 and 2003 tax cuts to expire and the cap and trade bill, to assert Coakley supports $2 trillion in tax increases.

“The theme of taxes hurting middle-income people and the economic recovery is the big take,’’ said Robert Blendon, a professor of health policy and political analysis at Harvard University. He added that Brown has the benefit of running just as Democratic leaders in Washington are hotly debating how to raise the money to pay for the health care bill. “He’s arguing that in this economic climate, you just can’t do that.’’

Brown has also localized the health care issue, arguing it will effectively force Massachusetts taxpayers to subsidize health care in other states. Brown has a unique advantage in that Massachusetts already has near-universal health insurance, so Coakley has little opportunity to base her appeals for the bill on helping the uninsured in her home state.

At the same time, Brown has played up the “special deals’’ that Senate leaders doled out to win votes, such as guaranteeing additional Medicaid money for the home states of Senator Ben Nelson, Democrat of Nebraska, and Senator Mary Landrieu, Democrat of Louisiana. “It is broken,’’ Brown said in his final debate with Coakley. “The backroom deals in Nebraska and Louisiana we know all about.’’

David Winston, a veteran national GOP consultant, noted that Brown has not campaigned against health reform per se - Brown says he supports making changes - but he would go about it differently. That’s smart, Winston said, because the public does believe the health care system needs to be changed.

It is also an argument that has been used before. In 1994, the insurance industry’s “Harry and Louise’’ ads that helped kill the Clinton health care bill ended with the couple lamenting, “There’s got to be a better way.’’