Help is aimed across harsh border 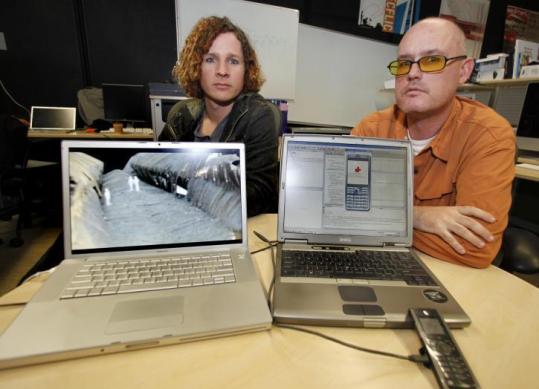 Brett Stalbaum and Micha Cardenas hope to create water-guidance software for cellphones to be given away in Mexico. (Lenny Ignelzi/ Associated Press)
By Elliot Spagat Associated Press / December 30, 2009

SAN DIEGO - A group of California artists wants Mexicans and Central Americans to have more than just a few cans of tuna and a jug of water for their illegal trek through the harsh desert into the United States.

Faculty at University of California, San Diego, are developing a GPS-enabled cellphone that tells dehydrated migrants where to find water, and pipes in poetry from phone speakers, regaling them on their journey much like the words of Emma Lazarus did a century ago to the “huddled masses yearning to breathe free’’ on Ellis Island.

The Transborder Immigrant Tool is part technology endeavor, part art project. It introduces a high-tech twist to an old debate about how far activists can go to prevent migrants from dying on the border without breaking the law.

Immigration hard-liners argue that the activists are aiding illegal entry to the United States, a felony. Even migrants and their sympathizers question whether the device will make the treacherous journey easier.

The designers - three visual artists on UCSD’s faculty and an English professor at the University of Michigan - are undeterred as they criticize a US policy that they say embraces some illegal immigrants for cheap labor while letting others die crossing the border.

“It’s about giving water to somebody who’s dying in the desert of dehydration,’’ said Micha Cardenas, 32, a UCSD lecturer.

The effort is being done on the government’s dime - an irony not lost on the designers, whose salaries are paid by the state of California.

“There are many, many areas in which every American would say, ‘I don’t like the way my tax dollars are being spent.’ Our answer to that is an in-your-face ‘So what?’ ’’ says UCSD lecturer Brett Stalbaum, 33, a self-described news junkie who likens his role to chief technology officer.

Migrants walk for days in extreme heat, often eating tuna and crackers handed out at migrant shelters in Mexico. On Arizona ranches, they sip desperately from bins used by cows when their water runs out.

Hundreds have perished each year since heightened US border enforcement pushed migrants out of large cities like San Diego and El Paso in the 1990s. In response, migrant sympathizers put jugs or even barrels of water in the desert.

The designers want to load inexpensive phones with GPS software that takes signals from satellites, independent of phone networks. Pressing a menu button displays water stations, with the distance to each. A user selects one and follows an arrow on the screen.

Some worry the software could lead migrants to damaged or abandoned water stations. Others wonder if it would lull them into a false sense of security, or alert the Border Patrol and volunteer border enforcers to their whereabouts.

John Hunter, who has planted water barrels in California’s scorching Imperial Valley since the late 1990s, says vandals destroy about 40 of his 150 stations every year.

“My concern is for people who arrive and find [the water] doesn’t exist,’’ he says.

Luis Jimenez, 47, was abandoned by smugglers and rescued by the Border Patrol twice this year - once after hitting his head on a rock and again after being bitten by a snake. The Salvadoran migrant, who hopes to reach family in Los Angeles, says he would try the GPS device but can’t afford one.

“If it tells you where to find water, it’s good,’’ he said at a migrant shelter in Tijuana, Mexico.

The phone designers say they are addressing those concerns and hope to have the phone ready by midsummer.

The water locations beamed to the phones will be updated constantly to ensure accuracy. If the distance is too far, the sites won’t appear on the screen.

The designers, who have raised $15,000 from a UCSD grant and an art festival award, hope to hand out phones for free in Mexico. The phones sell used for about $30 apiece. It costs nothing to add the GPS software.

Distribution would be tightly controlled by migrant shelters and advocacy groups to keep them away from activists who oppose illegal immigration. The migrants would need passwords to use them.

US authorities are unfazed. The Border Patrol has begun a $6.7-billion plan to drape the border with cameras, sensors, and other technology.

Critics of illegal immigration say the device is misguided, at best.

“If it’s not a crime, it’s very close to committing a crime,’’ said Peter Nunez, a former US attorney in San Diego. “Whether this constitutes aiding and abetting would depend on the details, but it certainly puts you in the discussion.’’