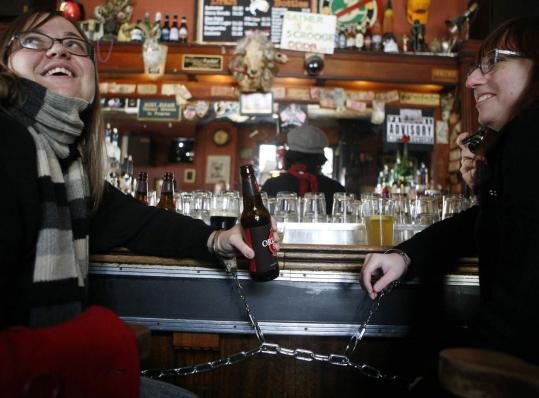 Renee Berger (left) and Julie Schworm drank their beers despite being handcuffed yesterday at Freddy’s Bar & Backroom in Brooklyn. Patrons plan to continue chaining themselves to the bar if developers attempt to demolish the noted establishment. (Jason Decrow/ Associated Press)
Associated Press / December 21, 2009

NEW YORK - Defenders of Freddy’s Bar & Backroom in Brooklyn are so eager to support the establishment against a recent eminent domain ruling that they’re practicing handcuffing themselves to the bar.

The locale is threatened by the 22-acre Atlantic Yards project. New York’s Court of Appeals, the state’s top court, ruled last month that the state can use eminent domain to force homeowners and businesses to sell their properties to make way for the development.

Yesterday, supporters bolted a chain to the establishment’s bar, and some patrons handcuffed themselves to it for about an hour while sipping on pints of beer. They say they will do it again when authorities try to seize the property.

Freddy’s hosts music performances, “Cringe’’ diary readings, and monthly diorama competitions. It was named one of the best bars in America by Esquire magazine in 2006.

Plans for the Atlantic Yards project in Brooklyn’s downtown include 8 million square feet of apartments, offices, stores, and an arena for the New Jersey Nets. The residential phase calls for 6,400 apartments, 40 percent of which would be reserved for low- to middle-income families.

The $4.9 billion development has been challenged in several lawsuits, and it has been slowed by the recession.