A catalog of Hitler’s ambition surfaces 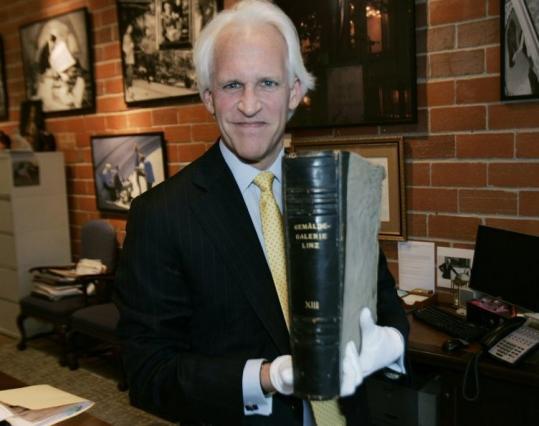 DALLAS - After fighting his way across Europe during World War II, John Pistone was among the US soldiers who entered Adolf Hitler’s home nestled in the Bavarian Alps as the war came to a close.

Making his way through the Berghof, Hitler’s home near Berchtesgaden, Germany, Pistone noticed a table with shelves underneath. Exhilarated by the certainty of victory over the Nazis, Pistone took an album filled with photographs of paintings, as a souvenir.

“It was really a great feeling to be there and we knew, by that time, he was on his last leg,’’ Pistone told the Associated Press.

Sixty-four years after Pistone brought the album home to Ohio, the 87-year-old has learned its full significance: It is part of a series compiled for Hitler featuring art he wanted for his “Fuhrermuseum,’’ a planned museum in Linz, Austria, Hitler’s hometown.

Pistone’s album is expected to be formally returned to Germany in a ceremony at the US State Department next month. Germany has 19 other albums discovered at the Berchtesgaden complex, part of a 31-album collection of works that were either destined for or being considered for the Linz museum.

Pistone’s 3-inch thick, 12-pound album has made a journey from obscurity that began this fall when a friend became curious about the book sitting on Pistone’s bookshelf.

The friend discovered after some Internet searching that the Dallas-based Monuments Men Foundation for the Preservation of Art was involved in 2007 in the restitution of two other albums that were part of a series documenting art stolen by the Nazis from Jewish families.

The organization’s founder, Robert Edsel, had become interested in what was done to protect art in World War II while he was living in Italy for a time after selling his oil and gas business. This fall, he traveled to Ohio to examine Pistone’s album. Seeing it convinced him that Pistone had one of the missing albums of the series on the planned museum.

Stamped on the album’s spine is “Gemaldegalerie Linz’’ - Gemaldegalerie means picture gallery in German - and the Roman numerals for 13.

Birgit Schwarz, a German art historian from Vienna who has written about Hitler and art, including a book called “Hitler’s Museum’’ that describes the albums in the series, is convinced Pistone’s album is authentic. She said she recognized paintings in the album along with the volume number and title.

Souvenir hunting was routine by soldiers during the war, and problems arise when people try to sell culturally important items rather than return them, said Thomas R. Kline, a Washington-based lawyer who specializes in art restitution and works for the foundation.

“It’s really important that as people go through their attics and they find the things that grandpa brought home, people are aware that something as simple as a book of pictures could have a cultural significance,’’ Kline said.