Profits will be funneled back into community 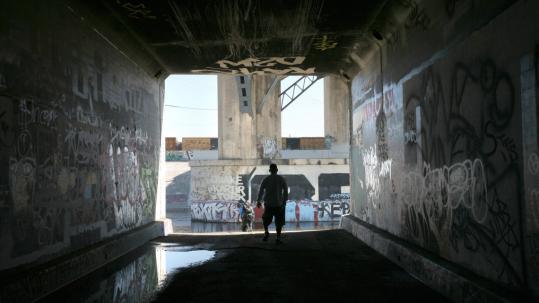 LOS ANGELES - A group of civic activists, united by faith and a belief that the poor economy in the interior of Los Angeles is a social injustice, is preparing to offer bus tours of some of the city’s grittiest pockets, including decayed public housing, sites of shootouts, and streets ravaged by racial unrest.

After a VIP preview last month, LA Gang Tours expects to open to the public in January, giving tourists a look at the cradle of the nation’s gang culture - the birthplace of many of the city’s gangs.

The nonprofit group plans to offer two-hour tours at an initial cost of $65 per adult, with profits funneled back into the community through jobs, franchised tours in new areas, and microloans to inner-city entrepreneurs.

The concept appears to have no equal in Los Angeles - for good reason, some people might contend. It seems to echo, more than anything, the “slum tours’’ of such sites as India’s Dharavi township and Rio de Janeiro’s “favelas.’’ Those tours have been lauded as innovative economic tools and mechanisms for humanizing poverty and attacked as exploitative and voyeuristic.

The Los Angeles tour comes after months of planning and is offered in a spirit of education and public service. Lomas, who will lead tours at first, plans to talk about important chapters in the development of the city’s core, such as how housing restrictions shaped ethnic enclaves and the formation of gangs.

Other aspects may raise eyebrows. Selling shirts painted on the spot by a graffiti “tagger’’ is one thing. But one backer said he also hopes to stage dance-offs between locals; tourists would choose a winner and fork over a cash prize. It wasn’t long ago that organizers decided against a plan to have kids shoot tourists with water pistols, followed by the sale of T-shirts that read: “I Got Shot in South-Central.’’

“It’s going to be fascinating - but really controversial,’’ said Francisco Ortega, a field staffer with the Los Angeles Human Relations Commission and a respected mediator and neighborhood adviser in South Los Angeles. Ortega said there could be great value in “sensitizing people, connecting them to the reality of what’s on the ground.’’

“But the other side is that it could come across like a zoo or something,’’ Ortega said. “It could be perceived as demeaning for the people who are living in these conditions.’’

City Councilwoman Jan Perry said she has offered bus tours of South Los Angeles herself - but those were for real estate leaders she was trying to persuade to invest in the neighborhood. She said South Los Angeles could benefit from an effort to demonstrate “the potential of the community.’’ But she said some aspects of this kind of tourism could go too far.

“It’s not right to put people on display,’’ she said.