On 68th anniversary of attack, survivor makes 1st journey back to Pearl Harbor 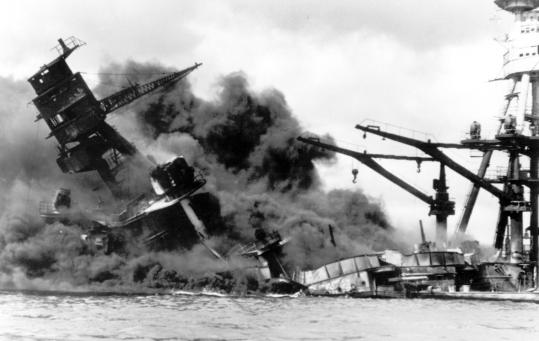 The USS Arizona was one of four battleships that sank during the Japanese attack on Pearl Harbor on Dec. 7, 1941. (Associated Press/ File)
Associated Press / December 7, 2009

PEARL HARBOR, Hawaii - A retired firefighter from Oregon is due to return today to Pearl Harbor for the first time since World War II to attend a ceremony marking the 68th anniversary of the Japanese attack.

Ed Johann, 86, said he will always remember the sound of planes diving out of the sky to bomb US battleships, the explosions, and the sailors’ screams.

“I really don’t know how I’m going to handle it,’’ Johann said from his home in Oregon. “When I think about it, all I have is unpleasantness. I’m sure it’s not like that now.’’

Johann was a teenage apprentice seaman on Dec. 7, 1941. He had enlisted in the Navy only five months earlier so his parents, who picked and packed tomatoes and other crops in the San Fernando Valley in California, would not have to support him.

He and two other sailors were waiting to ferry passengers on a small boat to and from the USS Solace, a hospital ship moored in Pearl Harbor, when they saw the explosions and flames from the stricken ships.

Johann’s motor launcher boat rushed to the USS Arizona, which was hit by several bombs. Already fueled and manned when the attack began, their 30-foot boat was the first rescue vessel on the scene.

They found the water full of people. Many were covered in the leaking oil from the ships. They loaded as many as they could and delivered them to the hospital ship before returning to the USS West Virginia for more.

Four US battleships sank and 188 US planes were destroyed in the attack. Another four battleships were damaged, along with three cruisers and three destroyers. More than 2,200 sailors, Marines, and soldiers were killed.

“We didn’t survive by any skill,’’ Johann said of his boat. “It was just luck, pure luck. Because all we were concentrating on was trying to save people and not save ourselves.’’

Johann served the rest of the war on the USS Wright.

After the war ended in 1945, he returned to California, where he worked in sawmills. He then moved to Portland, Ore. where he spent 28 years as a firefighter. He retired to Lincoln City and served on the City Council.