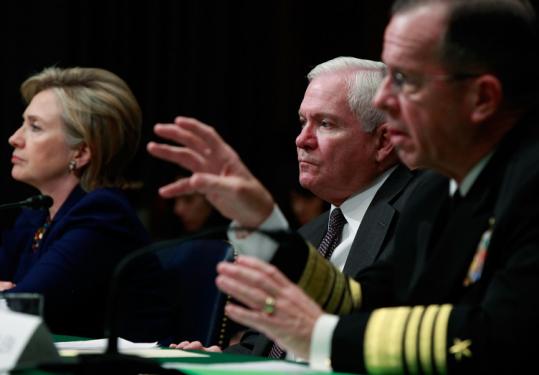 WASHINGTON - Three years after Barack Obama strongly rebuked President Bush’s surge of US troops to Iraq, Obama dispatched top administration officials to Capitol Hill yesterday to defend a surge of his own.

Defense Secretary Robert Gates, Secretary of State Hillary Rodham Clinton, and the Joint Chiefs of Staff chairman, Navy Admiral Michael Mullen, faced sharp questions from both Republicans and Democrats about whether their plans to send an additional 30,000 troops to Afghanistan could succeed. Time and time again, they responded with a common refrain: It worked in Iraq.

In testimony before the Senate Armed Services Committee, Gates referenced Iraq more than a dozen times, signaling that Bush’s last-ditch military push has been used as inspiration, if not a blueprint, by President Obama’s military advisers.

When Gates, who helped orchestrate Bush’s surge, was asked what success in Afghanistan would look like, Gates said: “I think the end state in Afghanistan looks a lot like Iraq.’’ He described success as the transfer of security to local authorities, including tribal militias, as long as they are hostile to Al Qaeda.

Gates said Afghanistan’s most peaceful areas could be handed over as soon as July of 2011, while “at the very same time [we could] have extraordinarily heavy combat going on in other provinces around the country, which is exactly what we saw in Iraq.’’

Later, he said that once security is reestablished, Afghans themselves could seek a speedy US departure - just as Iraqis did.

Left unsaid was the fact that Obama and many of his current advisers initially opposed Bush’s surge in Iraq. As a senator, Clinton suggested a cap on US troops there in 2007. Obama, also a senator at the time, sent out an e-mail in December 2006 titled “Escalation is not the answer.’’

“Our soldiers are not numbers to add just because someone couldn’t think of a better idea,’’ Obama said in the message. “We must not multiply the mistakes of yesterday, we must end them today.’’

Tuesday night, Obama announced not only the sharp increase of soldiers in Afghanistan to prevent the country from falling into Taliban hands, but the intention to start bringing troops home in July of 2011.

A White House spokesman did not return a call last night requesting a comment on whether Obama’s views on the Iraq surge had changed, and whether he used it as a model for his current strategy.

Bush’s decision to send 20,000 additional troops to Iraq in 2007 was deeply unpopular. But it is widely credited for helping to bring the country from the brink of civil war, although a separate effort to recruit former Sunni insurgents also contributed to the drop in violence.

Peter D. Feaver, a Duke University professor who helped shape Bush’s surge as a member of his National Security Council staff, said the Obama administration should have used his previous opposition as a powerful argument to convince fellow Democrats to support his surge now. He said Obama’s speech missed an opportunity to do that.

“He could have said, ‘Look, some people think this will not work. I understand their skepticism. I was skeptical about the surge in Iraq, but I was wrong,’ ’’ Fever said. “There is no crime in being wrong.’’

“We would not even be having this discussion if the [Iraq] surge had failed,’’ he said. “Despite Obama’s 2007 statements that it had failed, by summer 2008, Obama had come around, perhaps not openly, but enough to purge his campaign website of his previous criticism of the surge.’’

But Richard Danzig, a former Secretary of the Navy under President Clinton who advised Obama during his presidential campaign, said that Obama opposed Bush’s surge because “it came in the absence of a larger strategy and a plan for eventual reduction in force.’’

A former Obama adviser, who asked not to be identified because he is not authorized to speak publicly, said that Obama took three months to decide to increase troops in Afghanistan because he wanted an exit strategy in the plan - something that Bush resisted in Iraq because he thought it would signal weakness.

Indeed, Obama’s decision to announce a date for starting a withdrawal along with the surge drew the sharpest questions from senators yesterday.

Senator Joseph Lieberman, a Connecticut Independent, called the reference to July 2011 the most controversial aspect of Obama’s speech.

In another exchange, John McCain of Arizona, a Republican, asked: If commanders on the ground determine that sticking to that date would jeopardize the mission, “will we do it anyway?’’

Gates responded that the administration would carry out a full review in December of 2010 to see if the strategy is working. Gates initially said that the July date for the next year was firm, but later in the hearing said the president “always has the option to adjust his decision.’’

In response to a similar line of questioning by Senator Lindsey Graham, a South Carolina Republican, Clinton said: “I do not believe we have locked ourselves into leaving.’’

“By laying out a strategy that will begin to bring our mission to a close within the next 18 months, the president drew an essential distinction between his approach to the war and that of the previous administration,’’ he said.

Still, the three officials emphasized the successes of the previous administration’s surge rather than a break with the past. When Gates was asked whether Afghan troops could take over security in such a short amount of time, he said that the Iraq surge lasted only 14 months, but that US troops remained in an “overwatch’’ position for years.

When Senator John Thune, a South Dakota Republican, asked whether Obama’s new strategy would include reconciliation with some Taliban, Clinton noted that General Stanley McChrystal, the top US commander in Afghanistan, had hired General Graeme Lamb, a retired British general “who was instrumental’’ in reconciliation work in Iraq, to advise him.

The only senator who appeared keen to highlight the twist of history was Graham, who asked the three: “As you were debating what to do, did all of you realize this is the last, best chance America has to get it right in Afghanistan?’’