Gunman may have been injured by one victim 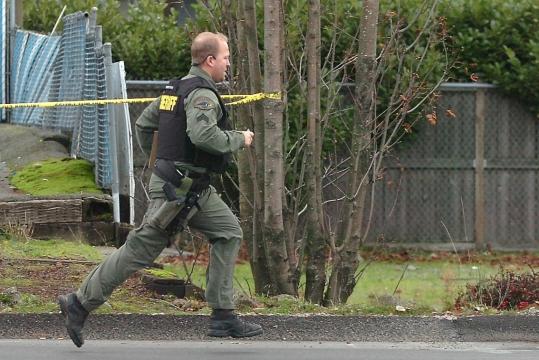 LAKEWOOD, Wash. - Four uniformed police officers were shot to death yesterday morning as they sat in a coffee shop preparing to begin patrol, prompting a widespread search for the gunman, who remained at large.

“Two of them were just flat executed, sitting writing reports,’’ Ed Troyer, a spokesman for the Pierce County Sheriff’s Office, said of the officers, who worked for the Lakewood Police Department. “One of them stood up and tried to go for the suspect and got shot. Then the fourth one fought his way out to the parking lot and fired off some rounds.’’

The suspect fled on foot, but Troyer said investigators had evidence that he may have been injured by the fourth officer, who fired at the suspect before dying from gunshot wounds.

“We hope that he hit him,’’ Troyer said. “If he’s hit, that means he’s injured somewhere with a gunshot wound. He’s going to have to get that taken care of some time, some place.’’

Late yesterday, the authorities said they were seeking a “person of interest’’ in the shootings whom they identified as Maurice Clemmons, 37. They described him as having an “extensive violent criminal history’’ in Arkansas and said he had recently been arrested in Pierce County and charged with assaulting a police officer and raping a child.

Nine years ago in Arkansas, The Seattle Times reported, Clemmons was released from prison after Governor Mike Huckabee commuted his lengthy prison sentence, over the protests of prosecutors.

Clemmons has an extensive violent criminal history from Arkansas, including aggravated robbery and theft, the sheriff’s office said. He also recently was arrested and charged in Washington state for assaulting a police officer, and second-degree rape of a child. Using a bail bondsman, he posted $150,000 and was released from jail last week

After the shootings at a coffee shop in neighboring Parkland, the gunman apparently fled into the strip-mall sprawl in Lakewood, officials said. The communities are suburbs south of Tacoma.

During the day, National Guard sharpshooters positioned themselves outside a nearby storage facility, helicopters hovered, and groups of bystanders were warned that they could be in the line of fire. Troyer said later that some of the search had been in response to what he called a hoax - a man called the police and falsely said he was the gunman.

The shooting took place near two major military bases, McChord Air Force Base and Fort Lewis, initially prompting concerns of terrorism, but officials later said that they believed the police officers were the intended targets.

Troyer said a caller reported the shooting at 8:15 a.m. The police said witnesses had told them that the gunman approached the counter and was asked for an order. The man then opened his jacket to reveal a weapon. The employee at the counter fled and heard gunshots soon after.

The officers who were killed were identified as Sergeant Mark Renninger, 39; Ronald Owens, 37; Tina Griswold, 40; and Greg Richards, 42. They worked on a patrol team for the Lakewood Police Department. The force was formed only in 2004, after the city took over its law enforcement from the Sheriff’s Office. It has about 100 officers.

Troyer said the shooting did not appear to be connected to the killing of a Seattle police officer, Timothy Brenton, who was shot while sitting in a patrol car on Halloween night. Several days later, police arrested a suspect in that shooting, Christopher Monfort. Seattle police have said Monfort, of suburban Tukwila, also played a role in the firebombing of four Seattle police vehicles in October.

The Lakewood officers were shot at a Forza Coffee Co. cafe, part of a chain of two dozen shops in Washington. The attack took place in unincorporated Pierce County, just a few hundred yards from the Lakewood city limit, in a small shopping center with a nail salon, a teriyaki restaurant, and a cigar shop.

Residents described it as a low-crime area, and Troyer said he did not think that robbery was a motive. Baristas and customers were left unharmed, and no money was taken.

The coffee shop and other places in the area are popular among law enforcement officers because the area is at the intersection of the cities of Tacoma and Lakewood.

“It’s a safe spot, it’s in a strip mall,’’ Troyer said. “It’s a place where they can plug in their computers, do reports, work, and share intelligence with other police officers and agencies.’’

Law-enforcement officers from at least four departments set up roadblocks and scoured streets, buildings, and parking lots around the coffee shop in a search for the gunman. Initially, there were conflicting reports whether one or two men were involved.

The police said they were looking for a man about 5 feet 8 inches tall, in his 20s or 30s with facial hair and a “scruffy’’ appearance, wearing a black coat and blue jeans.