Are you dreaming of a white Christmas? Blame the media 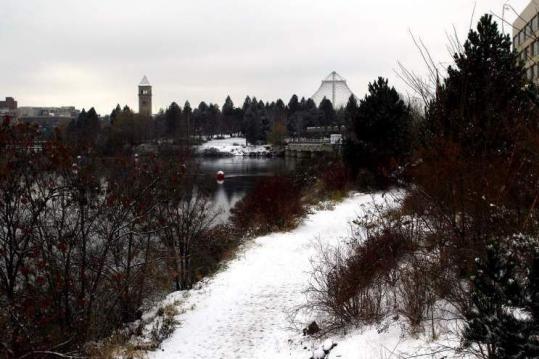 A view from Spokane’s downtown along the Spokane River, where there is a white Christmas 70 percent of the time. (Amanda Smith/ Associated Press/ File 2006)
By Nicholas K. Geranios Associated Press / November 29, 2009

SPOKANE, Wash. - Bing Crosby didn’t have to dream of a white Christmas - he could bank on it.

Crosby’s song tapped into a primal need for many living in the northern latitudes, where the notion of a white Christmas takes on mythic proportions. But why is snow important to a holiday celebrating the birth of a man in the arid climate of the Middle East?

“I think that it’s simply because of the picture-perfect image of snow on Christmas that is constantly put into our heads through Christmas advertising and images of Santa Claus at the North Pole,’’ said Karin Bumbaco, assistant state climatologist for Washington.

The federal Western Regional Climate Center in Reno gets flooded with calls this time of year, with people asking if their town will get a white Christmas, said Jim Ashby, a climatologist at the center. “They do care,’’ Ashby said

Snow on Dec. 25 is so desirable that there are websites devoted to the odds of your city having snow that day.

The National Climatic Data Center studies the chances of a white Christmas in various US cities. For the period 1988-2005, the agency found that the probability of having an inch of snow on the ground on Dec. 25 ranged from 100 percent in Fairbanks, Alaska, to 1 percent in Phoenix.

The snow-happy can head to the Rockies, the Cascades, and the Sierra Nevada mountains in the West, the Upper Midwest, and northern New England, according to the National Weather Service.

But they probably won’t need to shovel in Los Angeles, San Francisco, Portland, Ore., and Charlotte, where there’s a 1 percent chance of snow on Christmas Day.

There are lots of theories about why a white Christmas is considered desirable.

One credits Charles Dickens, author of “A Christmas Carol,’’ which was hugely influential in establishing several Christmas rituals. Dickens was born in 1812, and as a child experienced a run of very cold, snowy winters during Europe’s “Little Ice Age.’’ His romanticized memory of those winters went into the book.

In the past, snow meant horse-pulled sleighs, which made it easier for people to get together for the holiday. And nostalgic illustrations, like Norman Rockwell’s snowy Christmas scenes, also played a role.

The term “white Christmas’’ was immortalized in the song of the same name written in 1940 by Irving Berlin and sung in the movie “Holiday Inn.’’ Crosby’s version of the melancholy tune was a phenomenon, and is widely considered the best selling single of all time.

“We climatologists, along with the media looking for stories in what may otherwise be a slow news season, have worked together to continue to propagate this tradition,’’ Doesken said. “It would be interesting to see if we quit writing about it, and quit singing about it, if anything would change.’’