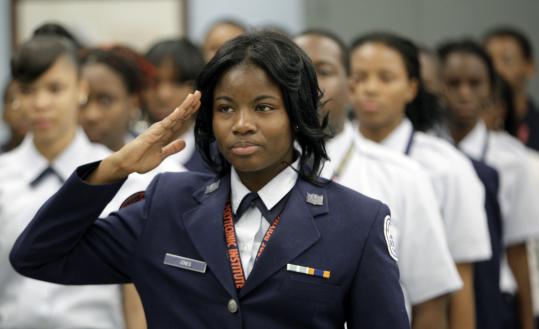 ANNAPOLIS - As the nation’s military academies try to recruit more minorities, they aren’t getting much help from members of Congress from urban districts with large numbers of blacks, Hispanics, and Asians.

From New York to Chicago to Los Angeles, lawmakers from heavily minority areas rank at or near the bottom in the number of students they have nominated for appointment to West Point, the Naval Academy, or the Air Force Academy, according to an Associated Press review of records from the past five years.

High school students applying to the academies must be nominated by a member of Congress or another high-ranking federal official. Congressional nominations account for about 75 percent of all students at the academies.

Academy records obtained through the Freedom of Information Act show that lawmakers in roughly half of the 435 House districts nominated more than 100 students each during the five-year period.

But Representative Nydia Velazquez of New York City, a Democrat and chairwoman of the Congressional Hispanic Caucus, nominated only four students, the lowest among House members who served the entire five-year period. Democratic Representative Charles Rangel, whose New York City district includes Harlem, was second-lowest, with eight nominations. And House Speaker Nancy Pelosi, whose San Francisco district is 29 percent Asian, was also near the bottom, with 19.

In fact, the bottom 20 House members were all from districts where whites make up less than a majority.

“It’s beyond my imagination how someone that has the ability to nominate doesn’t do it,’’ Craig Duchossois said last December at his final meeting as chairman of the Naval Academy’s Board of Visitors.

He noted what an academy appointment means: a free four-year education and a guaranteed job as an officer for at least five years after graduation.

Velazquez, Rangel, and Pelosi would not comment or did not return calls.

Academy leaders and some on Capitol Hill do not put all the blame on the politicians, pointing out that some districts might have a shortage of qualified candidates, either because students have not gotten the necessary preparation from their struggling schools, are unaware of the opportunity, or are uninterested.

But while the burden is ultimately on students to apply, academy leaders and others said elected officials should be doing more to publicize the opportunity. The academies have approached dozens of members of the Congressional Black Caucus and the Congressional Hispanic Caucus to discuss attracting more minority students.

Also, the military recently put together a how-to booklet on minority recruiting and sent it to all congressional offices, said Charles Garcia, chairman of the Air Force Academy’s board of visitors.

In addition, the Air Force Academy has begun flying in congressional staff members from districts with few minority nominations for lessons on recruiting, Garcia said.

“We train them on ‘Here are the things other districts have done that is successful,’ ’’ he said. “We are hopeful that will have a huge impact going forward.’’

Rangel, Velazquez, and most of the rest of the lawmakers who have made the fewest nominations have been among the loudest critics of the wars in Iraq and Afghanistan. Whether that is a factor in their low number of nominations is unclear. Representative Elijah Cummings, a Democrat and member of the House Out of Iraq Caucus, nevertheless nominated 128 students over the past five years from his Baltimore district, which is 64 percent black.

With help from academy officials, Cummings’s staff makes a presentation each spring to schools in his district about how to qualify and apply for an academy nomination. Cummings also designates staffers to respond to questions about the application process, the congressman said through a spokesman.

“There is an openness and a willingness to reach out and help in Cummings’s staff that you don’t see in the others,’’ said Roger Gauret, a retired Air Force major and an instructor in Baltimore Polytechnic Institute’s junior ROTC program. “They work it and they make it happen.’’

While lawmakers can offer assistance, Cummings stressed that it is up to students to seek a nomination, just as they are responsible for taking the right math and science courses, participating in extracurricular activities, and keeping in shape.

Representative Maxine Waters, whose district includes heavily Hispanic and black South Los Angeles and who is among the 20 lowest in nominations, said the wars in Iraq and Afghanistan have made young people in her district question military service. She said her efforts to reach out to high school students have not been very successful.

“In the olden days, parents would even say to young African-Americans, ‘You aren’t doing anything. You don’t have a job. Why don’t you join the service?’ ’’ said Waters, who has nominated 14 students in the past five years. “They don’t quite do that anymore.’’