Suspect a study in contrasts 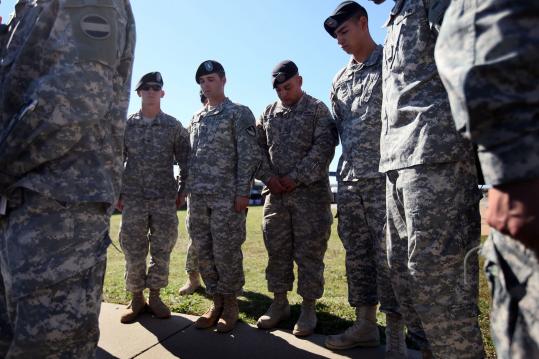 Army soldiers observed a moment of silence yesterday in honor of the victims of the shooting at Fort Hood military base. (Joe Raedle/ Getty Images)
By Mike Baker and Brett J. Blackledge Associated Press / November 7, 2009

FORT HOOD, Texas - As if going off to war, Major Nidal Malik Hasan cleaned out his apartment, gave frozen broccoli to one neighbor, and called another to thank him for his friendship - common courtesies and routines of the departing soldier. Instead, authorities say, he went on the killing spree that left 13 people at Fort Hood dead.

Investigators examined Hasan’s computer, his home, and his garbage yesterday to learn what motivated the suspect, who lay in a coma, who was shot four times. Hospital officials said some of the wounded had extremely serious injuries and might not survive.

The 39-year-old Army psychiatrist emerged as a study in contradictions: a polite man who stewed with discontent, a counselor who needed to be counseled himself, a professional healer now suspected of cutting down the fellow soldiers he was sworn to help.

Relatives said he felt harassed because of his Muslim faith but did not embrace extremism. Others were not so sure. A recent classmate said Hasan once gave a jarring presentation in which he argued that the war on terrorism was a war against Islam, and “made himself a lightning rod for things’’ when he felt his religious beliefs were challenged.

Investigators were trying to piece together how and why Hasan allegedly gunned down his comrades in the worst case of violence on a military base in the United States. The rampage unfolded at a center where some 300 unarmed soldiers were lined up for vaccines and eye tests.

Soldiers reported that the gunman shouted “Allahu Akbar!’’ - an Arabic phrase for “God is great!’’ - before opening fire Thursday, said Lieutenant General Robert Cone, the base commander. He said officials had not confirmed Hasan made the comment.

Hasan’s family said in a statement yesterday that his alleged actions were deplorable and do not reflect how the family was reared.

“Our family is filled with grief for the victims and their families involved in yesterday’s tragedy,’’ said Nader Hasan, a cousin who lives in northern Virginia. “We are mortified with what has unfolded and there is no justification, whatsoever, for what happened. We are all asking why this happened, and the answer is that we simply do not know.’’

The wounded were dispersed among hospitals in central Texas. W. Roy Smythe, chairman of surgery at Scott and White Memorial Hospital, said several patients were still at “significant risk’’ of losing their lives.

Army Chief of Staff George Casey said he asked bases around the country to assess their security. He also said he was worried about a backlash against the thousands of Muslim soldiers serving dutifully in uniform.

President Obama ordered the flags at the White House and other federal buildings be at half-staff and urged people not to draw conclusions while authorities investigate.

“We don’t know all the answers yet. And I would caution against jumping to conclusions until we have all the facts,’’ Obama said.

A moment of silence was held yesterday afternoon at Fort Hood and other US military bases as a show of respect for the victims.

Hasan was to be deployed to Afghanistan to help soldiers with combat stress, a task he had done stateside with returning soldiers, the Army said. Army spokeswoman Colonel Cathy Abbott was uncertain when Hasan was to leave but he was in the preparation stage of deployment, which can take months.

According to a Killeen police report in August, an Army employee was charged with scratching Hasan’s car, causing $1,000 in damage. Apartment manager John Thompson said the man charged was a soldier back from Iraq, who objected to Hasan’s faith and ripped a bumper sticker off the major’s car that said: “Allah is Love.’’

Kim Rosenthal, another neighbor, said Hasan didn’t seem too upset by his scratched vehicle, even though it was damaged so badly that he got a new one.

“He said it was Ramadan and that he had to forgive people,’’ Rosenthal said. “He forgave him and moved on.’’

Hasan appeared less forgiving to Dr. Val Finnell when they were classmates in a 2007-08 master’s public health program at the Uniformed Services University of the Health Sciences in Bethesda, Md.

He said that at a class presentation by public health students, at which topics like dry cleaning chemicals and house mold were discussed, Hasan talked about US military actions as a war on Islam.

Hasan made clear he was a “vociferous opponent’’ of US wars in Muslim countries, Finnell said.

“He made himself a lightning rod for things,’’ Finnell said. “No one picked on him because he was a Muslim.’’