US House race in N.Y. district too close to call 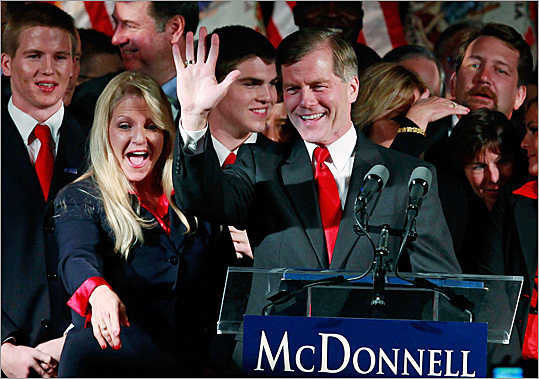 NEW YORK - Christopher Christie, a Republican former US attorney who said he would vanquish corruption from the halls of New Jersey government, won the New Jersey governor’s race yesterday, defeating Governor Jon Corzine and striking a blow against the Democratic Party on a national stage.

Christie, who accused Corzine of leading the state into economic turmoil, had nearly half of the vote to Corzine’s 44 percent, with more than 80 percent of precincts reporting.

Christie’s victory ended a bruising and bitterly fought race that often descended into personal attacks by both candidates. Although the campaign focused mainly on local issues, including a statewide corruption scandal, Republicans across the country were quick to portray Christie’s win as a defeat for President Obama.

The White House invested heavily in the New Jersey contest, a tacit acknowledgment that a defeat for Corzine would be interpreted as a rebuke of the president, potentially affecting Obama’s ability to pass major legislation and the public’s perceptions of the Democratic influence.

Republicans already captured the night’s other major gubernatorial race in Virginia, where Robert F. McDonnell, a former state attorney general, defeated the Democratic candidate, Creigh Deeds, a stark reversal of fortune for Democrats who have held control in Richmond for the past eight years. With 99 percent of precincts reporting, McDonnell had 59 percent of the vote, and Deeds 41 percent.

In upstate New York, the right wing of the Republican Party was hoping that Douglas L. Hoffman, a Conservative Party candidate, could win a House seat after a more moderate Republican nominee withdrew from the race at the last minute. But Democrat Bill Owens had a lead of about 4 percentage points as of 12:30 a.m. in the special congressional election, which grabbed national headlines in its final days as it highlighted divisions within the Republican Party.

Owens led Hoffman yesterday with 49 percent of the vote, with about 77 percent of precincts reporting in New York’s heavily Republican 23d House district.

Off-year races are often sleepy affairs, and the turnout for the most part appeared to be low yesterday. Few long lines were reported, even in New Jersey, the scene of the day’s toughest-to-call race. Voter apathy seemed to belie the more dramatic narrative that has been hoisted on the races, which political officials have described as high-stakes contests that could shape next year’s congressional agenda and reveal deep divisions within a Republican party seeking a return path to power.

In New Jersey, a fierce battle between Corzine and Christie quickly deteriorated into ad hominem attacks. Both candidates spent the final day of the campaign in a flurry of last-minute campaigning. Meeting voters in Bayonne around noon, Corzine pointed to the blue sky and called it a good omen - but only after growling at the city’s mayor, Mark Smith, to “drag, drag’’ people to the polls if necessary.

Christie held the hands of his youngest son and daughter as he walked into a voting booth in Mendham, N.J. at 7 a.m. to cast his vote. He told supporters, “Life will be a lot different tomorrow, one way or another.’’

Turnout appeared more brisk in the New York congressional race, where national Republican leaders, along with the local party, had chosen Assemblywoman Dede Scozzafava, a moderate, for the 23d Congressional District seat vacated when John McHugh, the Republican incumbent, was appointed secretary of the Army by Obama.

But prominent conservatives, including former governor Sarah Palin of Alaska, descended on the obscure district, urging voters to shift their allegiance to Hoffman, a former accountant who opposes abortion and gay marriage.

Scozzafava was driven to withdraw from the race on Saturday, and she then endorsed Owens, the Democrat. Vice President Joe Biden weighed in behind Owens on Monday, signaling that both parties see the seat as a significant gauge of voter sentiment.

Michael R. Bloomberg won a third term yesterday as New York City’s 108th mayor. With 99 percent of precincts reporting, Bloomberg was narrowly leading Comptroller William C. Thompson Jr., his Democratic rival, 50.6 percent to 46 percent. The mayor was projected to win, but by a much thinner margin than many had anticipated.

Bloomberg had persuaded the City Council to amend a law that would have restricted him to two terms, then spent $90 million of his personal fortune on his campaign. It was the fifth straight defeat for the Democrats, who, despite a huge registration advantage, have not captured the mayoralty since 1989.

Boston mayor's race
More Mass. elections
Election Day in US
Your comment is subject to the rules of our Posting Policy
This comment may appear on your public profile. Public Profile FAQ