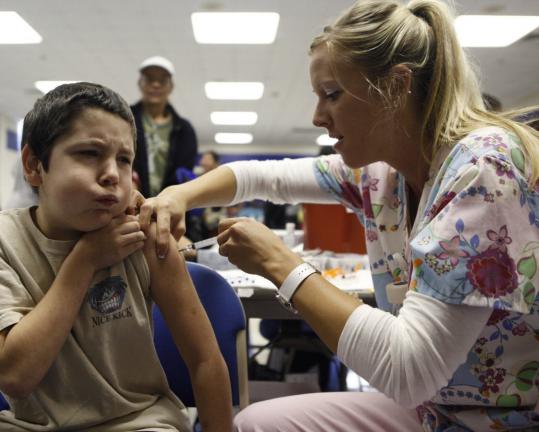 So far, 27 million doses of the H1N1 vaccine have been delivered, one of which was administered to a grimacing Anthony Adams, 10, last week in Haltom City, Texas. Makers say 10 million more doses will be available soon. (Jessica Rinaldi/ Reuters)
By Lauran Neergaard Associated Press / November 2, 2009

WASHINGTON - Independent health advisers will begin monitoring safety of the swine flu vaccine today, an extra step the government promised in this year’s unprecedented program to watch for possible side effects.

Decades of safe influenza inoculations mean specialists are not expecting problems with the swine flu vaccine, because it is made the same way as the regular winter flu vaccine. But systems to track the health of millions of Americans are being tapped to make sure - to spot any rare but real problems quickly, and to explain the inevitable false alarms when common disorders coincide with inoculation.

US health officials have spotted no concerns to date, said Dr. Bruce Gellin, head of the National Vaccine Program Office.

A specially appointed working group of independent experts will track the vaccine’s safety, too. Although the group will deliberate in private meetings, starting today, its charge is to raise a red flag if members feel the feds miss anything.

“Given the rapidity with which this particular vaccine was rolled out, there seems to be an extra-special obligation to make sure things remain as uncomplicated as they have in the past,’’ said Dr. Marie McCormick of the Harvard School of Public Health, who chairs the working group.

Vaccinations against the new flu, which scientists call the 2009 H1N1 strain, have begun more slowly than the Obama administration had hoped, with long lines for the nearly 27 million doses sent around the country so far. More is on the way, even as swine flu cases and hospitalizations continue to rise.

Presidential adviser David Axelrod said yesterday that the manufacturers of the vaccine were wrong when they advised the administration earlier this year that they would have 40 million doses ready near the end of October. Instead, only 28 million doses of vaccine were available.

Axelrod said the government will catch up to the demand for the vaccine within a week, when 10 million new doses become available.

How many people ultimately line up for shots depends in part on public confidence in the vaccine’s safety.

While vaccine side effects always are monitored, the H1N1 inoculations are getting extra scrutiny in part because the last mass vaccinations against a very different swine flu, in 1976, were marred by reports of a rare paralyzing condition, Guillain-Barre syndrome.

A report Friday in the British medical journal The Lancet said the intense monitoring will be crucial for an additional reason: separating normal disease rates from real vaccine risks. For example, about 2,500 miscarriages and 3,000 heart attacks occur every day in the United States, and some are sure to coincide with vaccination yet not be caused by it.

Today, McCormick’s group will hear safety data from studies of the swine flu vaccine in more than 10,000 people, some conducted by the government and others by manufacturers.

“To date, no serious adverse events have suggested any safety signals with H1N1 vaccines,’’ says a summary of the data, although it cautions that the studies are not large enough to rule out any very rare risk.

That is where the additional monitoring comes in.

Initial reports to a beefed-up government database - where anyone can report any symptom, and serious ones get intense investigation - showed nothing unusual after the first 10 million vaccinations, Gellin said. Most reports were of sore arms and fever; others detailed flu symptoms that suggested people already were infected when they got the shot, too late for it to help.

Gellin said one report of a death turned out to be caused by swine flu itself, not vaccine.

Other monitoring includes linking large insurance databases to state vaccine registries to track who visits a doctor and why after the shot, a program covering about 20 million people. Plus, there is specially targeted tracking of pregnant women, and work to tell if the risk of Guillain-Barre - which regularly strikes 1 in 100,000 people - is increased slightly by flu vaccine or not.

If serious problems crop up, federal law makes vaccine manufacturers and health officials immune from lawsuits. But it allows for a compensation fund for proven serious side effects, just as happens today with routine child vaccinations.

Health and Human Services officials are developing such a program for swine flu vaccine, just in case it is needed, spokesman Bill Hall said.