Critics question whether price tag was worth it 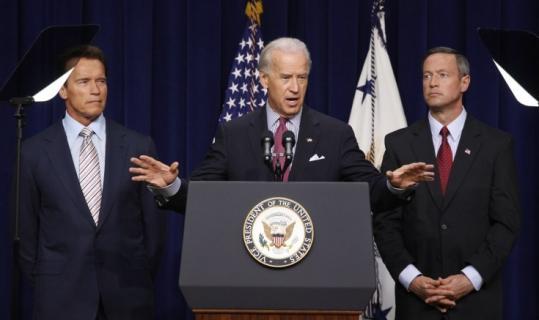 WASHINGTON - Nearly 650,000 jobs have been saved or created under President Obama’s economic stimulus plan, the government said yesterday, and the White House declared the nation on track to meet the president’s goal of 3.5 million by the end of next year.

New job numbers from businesses, contractors, state and local governments, nonprofit groups, and universities were released, showing 640,329 positions credited to the stimulus, according to the independent federal board monitoring the program’s progress.

Teachers and other education employees represent the largest number of jobs in the report - about 325,000. With state budgets in crisis, federal aid helped governors avoid major cuts in education.

Earlier this week, Governor Deval Patrick claimed that the Massachusetts had created or retained 23,533 jobs as a result of spending $1.9 billion in federal stimulus spending over the past eight months. Those individual jobs amounted to 8,792 full-time positions, according to the administration’s calculations.

The federal report released yesterday counted 12,374 full-time jobs created or retained in Massachusetts. Patrick administration officials said that the federal estimate also included the jobs that came as a result of federal funds going to nonprofits, businesses, and municipalities.

White House economic adviser Jared Bernstein said the figures show that, when adding in jobs linked to $288 billion in tax cuts, the stimulus has created or saved more than 1 million jobs.

Government recovery plans - everything from the $787 billion stimulus to tax credits for buying new homes to government deals on new cars - are credited with helping the economy grow again after a long and deep recession.

But the job market has yet to show signs of recovery, putting pressure on the White House to show that the stimulus was worth its hefty price. The economy has shed millions of jobs since Obama signed the stimulus in February, giving Republicans ammunition to say the government is spending too much for too little effect.

The White House said the latest report bolstered its case that the recession would have been far worse without the stimulus - a package of government spending, tax cuts, state aid, and social programs. The numbers released yesterday have limitations, since calculating “jobs saved’’ will always produce an inexact estimate, and collecting data from so many sources is certain to produce errors.

Bernstein said there’s not a huge distinction between jobs “saved’’ and jobs “created’’ by the stimulus money. Either way, he said, “it’s an unemployed person avoided.’’