Industry advances its own reform ideas 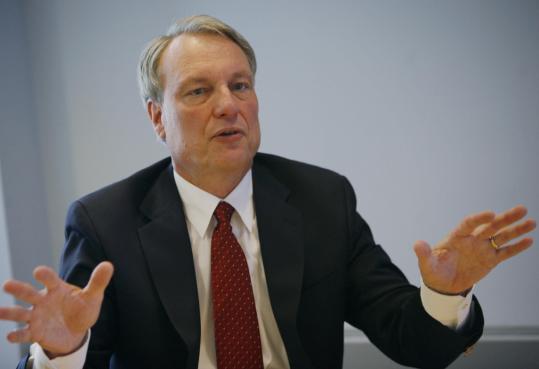 Richard Baker, president and chief executive officer of the Managed Funds Association, had been a congressman from Louisiana but resigned his seat. (Brendan Mcdermid/Reuters/File 2008)
By Michael Kranish Globe Staff / October 16, 2009

WASHINGTON - Hedge fund managers - a secretive, lightly regulated group portrayed by some as villains in last year’s financial meltdown - appear to have a new degree of clout on Capitol Hill in shaping legislation that will determine how they will be regulated.

To gain that clout, industry leaders are using a congressman-turned-lobbyist, a major increase in campaign donations, and a strategy that relies heavily on advancing their own reform ideas, making them active players in the legislative process and perhaps staving off more rigorous regulation measures.

Few might have predicted such an outcome just months ago for the hedge fund industry, which has a major presence in Boston and whose future will be largely decided in key committee votes this week and next.

Hedge funds - which are open to wealthy individuals, pension funds, and other institutional investors and bet on everything from variations in oil prices to the likelihood of mortgage foreclosures - have been under political and financial pressure in recent years; about 1,000 out of 10,000 hedge funds shut down during the last year, in many cases due to poor returns and cash-outs by strained investors.

Their critics are legion: President Obama chided hedge funds that balked at making concessions to automakers, saying, “I don’t stand with them.’’ Federal Reserve chairman Benjamin Bernanke said insurance giant AIG crashed because it acted like a hedge fund, although that was not the company’s business.

Yet at a time when some banks, business groups, and credit card companies are struggling to fend off sweeping regulatory proposals now under consideration by the House Financial Services Committee and its chairman, Barney Frank of Massachusetts, the hedge fund operatives have been more successful by embracing a key reform and haggling only over the details.

The hedge funds have agreed that their advisers should no longer be exempt from a requirement that they register with the US Securities and Exchange Commission. That would give the government access to information about their holdings that many funds have zealously guarded.

In what amounts to a political form of a classic hedge, the industry trade group, the Managed Funds Association, adopted its new strategy when it hired a one-time critic as its president. Ten years ago, a Republican congressman from Louisiana, Richard H. Baker, set off howls of protest from the nation’s hedge fund managers when he proposed they register with the government and provide detailed trading information. The bill went nowhere.

Last year, as criticism of hedge funds was mounting, the trade group hired Baker as its president. Baker resigned his seat in Congress and, in his new job, persuaded some recalcitrant members to support many of the regulatory measures he proposed a decade ago, most notably registration by fund advisers. By getting his membership to embrace registration, Baker may enable the industry to avoid more onerous provisions as Congress overhauls financial regulations in hopes of preventing another Wall Street meltdown.

Baker, while insisting that hedge funds have received a bum rap, said the industry had no choice but to change its strategy. “We are no longer something that can be ignored by regulators or by the Congress,’’ Baker said in an interview. He said many lawmakers know little about hedge funds, leading his organization to address a “dramatic need for education on the Hill.’’

Baker recently wrote in a blog distributed to hedge fund traders about his ability to gain access to members of both major parties. Since his one-year ban on lobbying Congress expired early this year, Baker wrote, “I have held scores of meetings with my former colleagues.’’

Baker reported that he was able to “receive a receptive ear.’’ But he warned the hedge fund traders to be vigilant because there is “never . . . a cessation of hostilities’’ in politics.

Frank, one of the most liberal members of Congress, said Baker, his former colleague on the Financial Services Committee, has been “a very reasonable guy.’’

Now, as Frank’s committee meets this week and next to finalize its version of financial regulation legislation, Baker’s strategy is being put to a crucial test. Yesterday, the committee voted to impose new regulations on the trading of derivatives, which many hedge funds rely upon. The committee is expected to focus in the coming days on the proposal for hedge fund registration.

The oversight of hedge funds affects not only wealthy people who invest directly in them, but also tens of millions of average Americans who may not realize that their pension or mutual fund has a stake.

Boston is a major center both for hedge funds and their investors. Several hundred companies are involved in the business, and major investments are held by local institutions, such as pension funds and university endowments.

For example, 8 percent of the Massachusetts state pension reserve is invested in hedge funds, although that is down from 11 percent earlier this year. The hedge fund investments have worked well, said Michael Travaglini, the state pension fund’s executive director.

“We think hedge funds performed the way they advertised they would,’’ Travaglini said.

The collapse of a single fund can have wide repercussions, however.

Massachusetts-based fund Sowood Capital Management shut down in 2007 after losing $1.6 billion of investors’ money, including $30 million at the state’s pension fund. But Richard Goldman, founder of the Boston Hedge Fund Group, an industry networking organization, said that most hedge funds in Massachusetts have done well in comparison to equity funds, and he said the field has been growing significantly in recent months as institutions seek to diversify their portfolios.

To critics, hedge funds have been the face of what is wrong with how Washington allowed the financial industry to operate without enough oversight or accountability in recent years. Hedge funds advisers have not been required to register with the government, putting them in a relatively regulation-free zone that has fueled their growth. “The assumption is that they did play a destabilizing role’’ in last year’s meltdown, said Michael Greenberger, a specialist on hedge funds who is a former director of the Division of Trading and Markets at the Commodities Futures Trading Commission.

It is impossible to say how large a role they played in last year’s financial meltdown because so little is known about many funds. Still, the Obama administration declared that it is too risky to have such a large amount of economic activity go unregulated and called for requiring hedge fund advisers to register with the SEC, meaning they might be subject to far more disclosure to the government, and potentially to be taken over if they are found to pose a systemic risk to the economy.

While Baker supports registration, he has concerns about the way it would work, such as whether the smallest and safest funds will have to agree to same level of disclosure as others.

An industry priority is to keep private the information that hedge funds disclose to regulators. So far, the industry appears to have fought that off that level of disclosure.

One of Baker’s selling points in fighting stronger regulations is that hedge firms have lowered their risk by cutting how much they are leveraged, with an average ratio of money borrowed to assets of 2 to 1 over a five-year period ending in 2008. Many financial institutions that collapsed last year were much more leveraged. Baker also argues that hedge funds had nothing to do with the financial meltdown, and he stresses that no hedge fund received a taxpayer bailout.

As they make their case to Congress, hedge fund representatives have dramatically increased their spending on lobbying, going from less than $1 million in 2006 to nearly $8 million in 2008, according to the Center for Responsive Politics. They also recently began contributing much more heavily to politicians, especially as Democrats took power in the White House and Capitol Hill. They nearly quadrupled their contributions from 2006 to 2008, to $16.8 million, the center said.

In the current 2010 election cycle, hedge fund officials have continued their historic tilt toward the Democrats, who received 71 percent of the $1.3 million in industry contributions. Many hedge fund managers are Democrats, including George Soros, who runs Soros Fund Management and has given millions of dollars to Democratic causes, including the liberal group MoveOn.org.