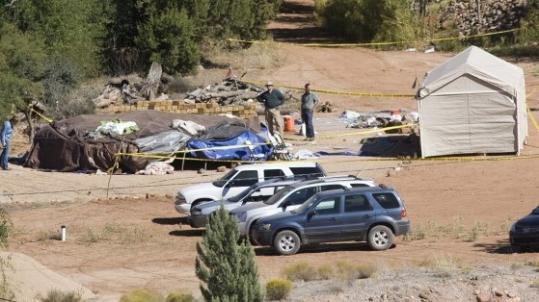 PHOENIX - Two people died and 19 others were taken to hospitals after being overcome while sitting in a sweat lodge at a Sedona retreat, authorities said yesterday.

In all, 21 of the 64 people crowded inside the sweat lodge Thursday evening were transported to hospitals. Four remained hospitalized last evening - one in critical condition and the others in fair condition.

Authorities haven’t determined the cause of the deaths and illnesses; tests for carbon monoxide and other contaminants were negative. Dwight D’Evelyn, Yavapai County sheriff’s spokesman, said authorities were checking into whether any of the attendees had preexisting medical conditions and the possibility that some of them might have been fasting.

Self-help expert and author James Arthur Ray rented the facility as part of his “Spiritual Warrior’’ retreat that began Oct. 3 and that promised to “absolutely change your life.’’ The schedule had few details about what participants could expect, other than thrice-daily meals and group gatherings that started at 7 a.m. and ended 16 hours later.

The dead were identified only as a man and woman, both middle-age.

“There are a lot of issues that may have led up to these injuries and deaths,’’ D’Evelyn said.

“It’s not something you’d normally see at one of the resorts there.’’

Doerksen, whose fire district responded to emergency calls, said he sent a hazardous materials team into the sweat lodge to test for carbon monoxide, carbon dioxide, and other contaminants.

“The test they ran didn’t show anything out of the ordinary,’’ he said.

Sedona is a resort town about 115 miles north of Phoenix famous for its red rocks. It is well known as a center for the modern spiritual movement.