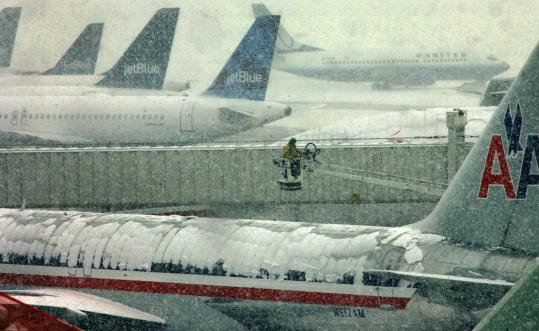 Under an EPA proposal, Logan International is among six of the largest US airports that would have to install deicing “pads’’ or other collection systems to contain 60 percent of fluid sprayed. (John Tlumacki/Globe Staff)
By Melanie E. Welte Associate Press / September 30, 2009

DES MOINES - Every winter, airports across the country spray millions of gallons of deicing chemicals onto airliners and allow the runoff to trickle away. When the chemicals end up in nearby waterways, the deicing fluid can turn streams bright orange and create dead zones for aquatic life.

The practice is legal, but environmental officials want it to stop.

“We normally don’t think of airports as one of our major polluting facilities,’’ said Chuck Corell, water quality bureau chief with the Iowa Department of Natural Resources. “I think it’s safe to say that for years it was unchecked.’’

Not every airport lets the chemicals drain off the tarmac uncollected, but those that do range from some of the nation’s largest - including John F. Kennedy in New York and Chicago’s O’Hare - to small regional airports such as the Eastern Iowa Airport in Cedar Rapids. Both activists and federal environmental officials say the chemicals slowly create waterways that won’t support life.

“Here you have millions of gallons a year of this deicing chemical running off untreated directly into that bay,’’ said Larry Levine, an attorney with the Natural Resources Defense Council, which sued New York over deicing chemicals that flow from JFK into the Jamaica Bay Wildlife Refuge. “Anything that can’t swim away is going to die.’’

Proposed US Environmental Protection Agency regulations would require airports to capture at least some of the deicing fluid after it is used to rid planes of ice and snow. The agency says those rules would reduce by 22 percent the discharge of chemicals, which lower oxygen levels in waterways and prevent fish and other aquatic creatures from breathing.

The two main types of deicing fluids - propylene glycol and ethylene glycol - are not generally seen as a threat to human health. Ethylene glycol, which also is used in antifreeze, is generally only toxic in humans if ingested. Propylene glycol is a generally recognized as safe additive for foods and medications, according to the US Food and Drug Administration.

Under the EPA’s proposed regulations, six of the nation’s 14 major airports that are the biggest users of deicing fluid - JKF, O’Hare, Cleveland-Hopkins International, Newark Liberty International in New Jersey, Boston Logan International, and LaGuardia Airport in New York - would have to install deicing “pads’’ or other collection systems to contain 60 percent of fluid sprayed.

The airports would then have to make sure the collected liquid was treated to remove any toxins, the EPA said.

Officials at five of those six airports either said they were meeting all current runoff rules or declined to comment. A spokeswoman for the Cleveland airport said that facility already uses a deicing pad.

Mary Smith, director of engineering and analysis division in the EPA’s Office of Water, said the other eight major airports already have deicing pads and probably won’t have to make changes to comply with the proposed rules.

About 200 smaller airports would be required to collect 20 percent of the fluid by using technologies such as a glycol recovery vehicle, which is basically a vacuum that sucks up the chemical. Airports with less than 1,000 annual jet departures wouldn’t be affected.

Dean Schultz, a spokesman for the American Association of Airport Executives, criticized the proposed rules as unnecessary. He pointed to current regulations in which the EPA or an authorized state agency issues general permits or more detailed individual permits that cover deicing discharges. Schultz said additional rules would be redundant and costly.

“We all don’t have the same issues. We all don’t dump to the same discharge waters,’’ Schultz said. “It’s a bit of a shotgun approach to solving the problem when there’s already a mechanism in place to deal with it in a more case-by-case basis.’’

Under existing rules, adopted in the 1990s, airports are required to minimize contamination of stormwater runoff and must monitor for pollutants, including deicing fluid. Some states have required additional measures when reports showed high levels of the chemicals.

Environmental officials in Iowa discovered the issue after residents complained. At the Eastern Iowa Airport in Cedar Rapids, neighbors living along a creek noticed the water had turned bright orange. At Des Moines International Airport, neighbors reported water that had a green, cloudy tint with a chemical odor.