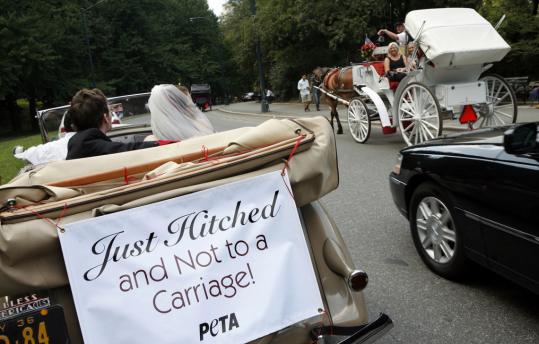 NEW YORK - Love and marriage, for Kelly Respess, are better suited to a “horseless carriage’’ - specifically, the antique Ford that delivered her to her wedding on a busy Central Park corner.

It was a small but eye-catching salvo in the long-running war between animal rights activists such as Respess and her groom, Paul Kercheval, and the horse-drawn carriages that are a fixture in Central Park.

If the Kerchevals have their way, a fleet of electric cars resembling vintage automobiles will replace the carriages - retaining, the couple says, Central Park’s old-world flavor while relieving the horses of their burden and being kind to the environment.

The newlyweds belong to People for the Ethical Treatment of Animals, which recently began promoting the antique car idea in New York.

“Think ‘Great Gatsby,’ ’’ said Virginia Fort of PETA as she made final preparations for the wedding ceremony.

A white strip of cloth sprinkled with rose petals led to an altar.

A small table was laden with bottles of sparkling cider and a cake topped with a happy couple - two figurines of horses.

The Central Park setting was less than romantic: buses belched, taxis honked, and passing sirens blared. The scent of horse urine was heavy in the air.

Respess, 25, and Kercheval, 26, chose the site because it was in full view of the horse-drawn buggies that line up along Central Park South, awaiting riders who pay $34 for about half an hour of clop-clopping through the urban wilderness.

Animal rights groups have made little headway in their campaign to end the practice, despite support from some politicians and celebrities.

In 2008, Chrissie Hynde of the Pretenders was the star attraction at a protest in New York. The singer, who got married in one of the horse-drawn buggies in the 1980s, said: “The marriage didn’t last, and I hope the carriages meet the same fate.’’

In 2007, city councilman and mayoral candidate Tony Avella began pushing for a ban after Smoothie, a 13-year-old carriage horse, was spooked by a passing musician’s drum. Smoothie bolted, crashed into a tree and died.

A public hearing on the horse-drawn carriages in January 2009 drew hundreds of people, but the proposed ban went nowhere.

Mayor Michael R. Bloomberg has contended that it would put hundreds of carriage drivers out of work at an especially difficult economic time.

The pro-carriage lobby also has its celebrities - including actor Liam Neeson, who weighed in during the January hearing with a letter to city officials that read in part: “The horse-drawn carriage business is an iconic part of this city, employing hundreds of dedicated, hard-working men and women, caring for well-bred, well-trained horses and attracting tourists to New York City for over 100 years.’’

The drivers, who joined the Teamsters union in 2009 to strengthen their position, agree.

PETA advocates phasing in electric replicas of antique cars and giving the horse-drawn carriage operators the new drivers’ medallions, so that no one loses a job.

The search is on for a company to provide the vehicles, said Respess and Kercheval.

For the newlyweds, the wedding-as-protest was a no-brainer.

“We chose to get hitched. Those horses don’t have that choice,’’ said Respess, who wore a fluffy, snow-white gown and carried a bouquet of red roses and white lilies.

Her mother, Gail O’Neill, said she had no qualms about seeing her daughter get married on a traffic-choked corner. As the groom kissed the bride, passers-by broke into applause.

Asked if she thought the public ceremony would make a difference in the carriage fight, O’Neill replied, “It might only be one-thousandth of a percent, but it’ll be one step forward. You don’t turn around, you don’t look back, you just keep putting the word out.’’