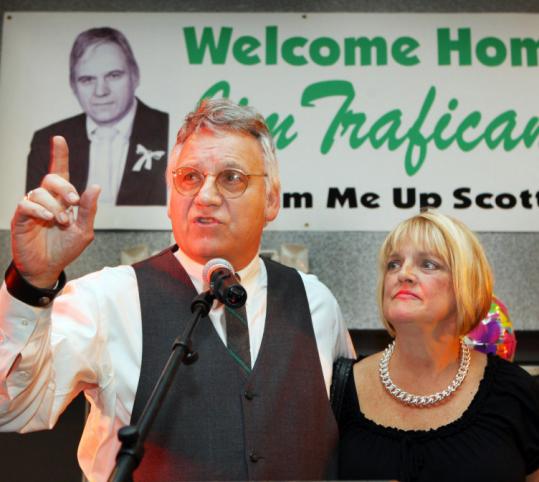 YOUNGSTOWN, Ohio - The Elvis impersonator had ceded the stage, and the toupee contest was over.

The main act appeared to thunderous applause, looking pretty plucky for a guy who had just spent seven years in prison.

“I plan to get right back in it!’’ boomed James Traficant, the former Democratic representative from Ohio’s 17th district, announcing to 1,200 cheering supporters Sunday he just might still have a little of the old magic under that memorable rug.

Just like in his salad days, Traficant promised that he would take on the federal government that he said “cheated’’ to put him behind bars for racketeering and bribery. As the crowd shouted “Run for Senate,’’ he trashed the wars in Afghanistan and Iraq and caused a frenzy when he proclaimed: “If we can take care of people all over the world, we can take care of people here!’’

Calling himself “a congressman and a convict,’’ Traficant, released Wednesday from prison, invoked imprisoned Nelson Mandela and said he “knew America better’’ because of his years behind bars.

The more Traficant talked, the more people pressed toward him for autographs. He looked fit. A friend described his new hair as a “partial toupee.’’ He had cut off the ponytail he grew in prison and was wearing a vest and his trademark skinny tie.

Nobody at this welcome-home party in suburban Youngstown’s Mr. Anthony’s Banquet Center cared that Congress voted 420 to 1 to expel him. Bunch of Washington elites - who trusts ’em?

“I think he still feels he has a mission,’’ said John Brown, 73, a retiree in the crowd who used to own a steel company. He said he believes Traficant was “wrongfully accused. I never thought our legal system could get this low.’’

Looking around the packed hall where 1,200 people sat eating meatballs and chicken and listening to Elvis songs (a Traficant favorite) and Patsy Cline, he said: “I don’t think all of these people are screwballs.’’

“He is the only one in Youngstown who ever says what he means,’’ said Glenn Davies, 41, who pressed his “Welcome Home Jimbo’’ T-shirt into Traficant’s hands for a signature, as the former lawmaker shook hands for more than two hours Sunday night. “I am going to hang this on the wall of my car wash.’’

“Jimbo’’ once called the Internal Revenue Service the “Internal Rectal Service.’’ They’re still talking about that one. Saturday, a few days after walking out of prison, he called a radio show to complain that because of his “ordeal’’ (he’s a convicted felon) he can’t carry a gun to go turkey hunting. What kind of an upside-down country won’t let a guy like Jimbo go turkey hunting?

Traficant’s return has thrown a spotlight on, and riled up, this struggling old steel-mill valley in northeast Ohio.

In a county whose minor league baseball team is called the Scrappers - the head of the chamber of commerce explained that “the population is scrappy, they fight back’’ - many see Traficant as one of them, a regular guy who was railroaded by the federal government.

Some are already urging Traficant, 68, to run for office. Ohio officials point out that state law prohibits Traficant from holding local office, but no federal law prohibits him from running for Congress.

But many others are appalled at the welcome he is getting. They remember the envelopes of money he demanded of his own staff, the taxes he didn’t pay, the political clout he traded for gravel and contractor muscle on his horse farm. And now they worry that his reemergence as a figure in Youngstown will set back efforts to improve the city’s image.

Even if he doesn’t run for office again, it’s unsettling and dumbfounding to some people here that Traficant could be a political player in this valley of more than 500,000 people.

“The perception that he is being received back as a conquering hero is not true,’’ said Mayor Jay Williams, adding that the quiet majority believes he “no longer represents who we are.’’

“His antics, his vision of what is appropriate and inappropriate . . . we are beyond that now,’’ said Williams, elected Youngstown’s first black mayor in 2005.

A decade ago, during the Traficant era, the sheriff, the county prosecutor, judges, mob boss Lenny Strollo, and people with names like Charlie the Crab - more than 70 people altogether - went to prison for mob-related activity.

“We have moved on,’’ said David Betras, chairman of the Mahoning County Democratic Party.