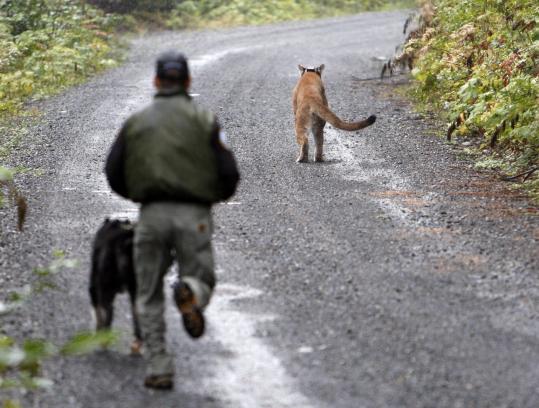 SEATTLE - A cougar that apparently lived in Seattle for more than two weeks and forced the city’s largest park to close was captured early yesterday and returned to the wild, state wildlife officials said.

The cougar was immobilized with a tranquilizer in Discovery Park at about 2:30 a.m., said Darren Friedel, a spokesman for the Department of Fish and Wildlife.

An enforcement officer tracked the animal after authorities were told the cougar had been spotted Saturday evening, the latest sighting in or near the 534-acre preserve, Friedel said.

The cougar is a 2 1/2-year-old male, weighs 140 pounds, and is in very good health, Captain Bill Hebner said.

After examining the animal, wildlife agents drove it to be released in the Cascade foothills near Skykomish, about 45 miles northeast of Seattle.

“It’s a very good prospect for relocation,’’ Hebner said. “It wasn’t aggressive or stalking people, and it maintained its natural respect for the wild.’’ The animal probably preyed on house cats during its time in the park, he said.

Agents will attach a global positioning system collar on the cougar, or mountain lion, which will send updates on its location twice a day, he said.