Breaking down a sound barrier for the youngest patients 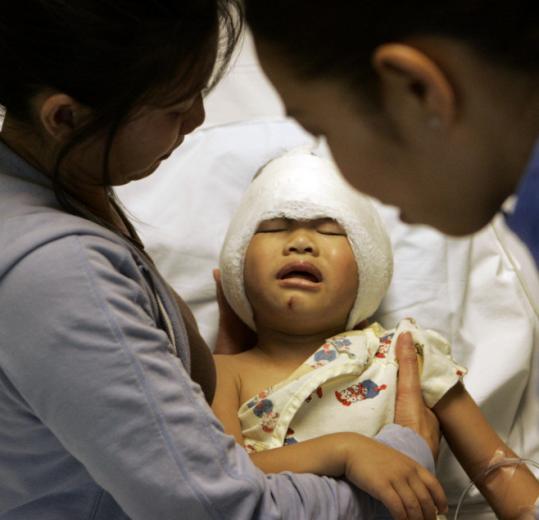 Tyler de Lara underwent surgery to receive cochlear implants. Each device consists of a removable headset and a piece that is surgically implanted. A receiver inside the skull picks up signals and sends messages to electrodes inserted inside the inner ear. (Anne Cusack/ Los Angeles Times)
By Shari Roan Los Angeles Times / August 16, 2009

LOS ANGELES - Tyler de Lara, 2, thrashes on a gurney, tangled in his sheet, hospital gown, and IV tubing. A white bandage encircles his head and, loosened by his squirming, slips down and covers his eyes.

All that shows is a tuft of black hair and his mouth, set in an angry pout.

Tyler was diagnosed as deaf six months earlier. Now, on an autumn morning at the University of California-Los Angeles’s outpatient surgery center - after several misdiagnoses, battles with insurance companies, and much worry and waiting - he is drifting from a cloud of anesthesia with two cochlear implants nestled in his skull.

His parents, Michael and Marieta, hope he finally can enter the world of those who speak and hear.

One or two of every 1,000 US children are born profoundly deaf, numbers that have not changed for decades. What is changing - at an unprecedented pace - is the number of those children under 3 who are receiving cochlear implants, electronic devices that mimic the function of delicate cells of the inner ear.

About 40 percent of such children now receive a cochlear implant, up from about 25 percent five years ago. Medicaid and most private insurers will pay for at least one implant, and the number of deaf children who receive one or even two is projected to rise further.

Cochlear implants have long been endorsed for adults. But studies published in the past two years have delivered what many specialists say is ironclad evidence that the devices are safe in babies and toddlers and allow most children to develop spoken language without extensive occupational therapy.

“It used to be a big decision, a big, bold move,’’ says Efrat A. Schorr, a developmental psychologist at the University of Maryland. “It’s not anymore. It’s become the standard of care for children with profound hearing loss.’’

Before implants, deaf children learned American Sign Language or lip reading. Most fared well, although many could not speak. Like the De Laras, however, many families whose children receive implants today are dissuaded from learning sign language, a trend that will bear repercussions for the entire deaf community and that some specialists fear is a mistake.

Tyler’s generation, hearing specialists say, will redefine what it means to be deaf.

“I describe it as a revolution,’’ Schorr says. “It’s close to a miracle, what this technology has made possible.’’

Designed for people who are deaf or have little hearing, cochlear implants were developed in the 1970s. The device consists of a headset that is removable and a piece that is surgically implanted. A microphone-speech processor the size of a hearing aid is hooked over the ear to process sounds, which are then sent to a transmitter the size of a quarter that adheres to the head, just behind the ear, with a magnet.

A receiver implanted inside the skull picks up signals and sends messages to electrodes inserted inside the inner ear - stand-ins for the tiny hair cells that, in the majority of deaf people, are damaged. The message moves on to the brain.

Tyler received two implants, one on each side of his head.

“We just want him to hear,’’ says his father, Michael, 38, a registered nurse. “We want him to be independent.’’

Ninety percent of deaf children, like Tyler, are born to hearing parents. A nationwide embrace of programs to screen newborns and flag those with hearing problems before they leave the hospital has meant such babies are identified at increasingly younger ages: at an average of two to three months, compared with 2 1/2 to 3 years in 1990.

Some, like Tyler, slip through the cracks. The results of his exam - which came up normal - were either erroneous or he lost his ability to hear later on.

By age 1, Tyler was still a silent child. The De Laras were suspicious that their son wasn’t hearing. His pediatrician said not to worry: Boys are usually late talkers.

One day, shortly after Tyler’s first birthday, Michael grabbed two pans and slammed them together a few feet from where his son was sitting. Tyler didn’t flinch.

An audiologist told the couple Tyler had some hearing loss and recommended aids. The couple paid $5,000 for top-of-the-line models. Tyler, almost 2 when the devices arrived, hated wearing them. Then a friend told them about John Tracy Clinic in Los Angeles, which provides free services to preschool-age children with hearing loss. An examination there showed Tyler was profoundly deaf. By then, he was 2 1/2 years old.

Research shows that the earlier a child receives the implant, the better his or her spoken language is by age 3 1/2. Clinic instructors advised the De Laras that there was still time for Tyler to receive cochlear implants, if that was their choice.

About four days after both his implants were turned on, Tyler began insisting on keeping them on at night.

He now stops playing with the pots and pans. His parents guess that the clanging now bothers him as much as it always did them and his sister.

He also shows preference for certain sounds: The noise from the vacuum cleaner frightens him. The sound of a jet engine has him searching the sky. When Marieta’s cellphone rings, he looks at her expectantly.