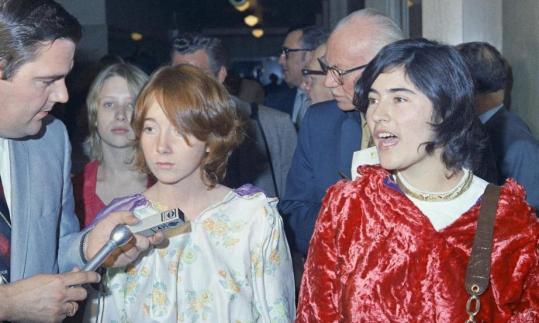 Lynette Fromme and Catherine Share outside the courtroom in the Los Angeles Hall of Justice after a hearing in 1970. (Associated Press Photo/ File)
By Linda Deutsch Associated Press / August 9, 2009

LOS ANGELES - Forty years ago, they were children. Vulnerable, alienated, running away from a world wracked by war and rebellion. They turned to a cult leader for love and wound up tied to a web of unimaginable evil.

They were part of Charles Manson’s “Family’’ and now, on the brink of old age, they are the haunted.

“I never have a day go by that I don’t think about it, especially about the victims,’’ says Barbara Hoyt who was 17 the summer of the Sharon Tate-LaBianca murders. “I’ve long ago accepted the fact it will never go away.’’

The ones who aren’t in prison are scattered across the country. Some live under assumed names to hide their past from friends and business associates. Some have undergone surgery to remove the “X’’ that Manson ordered them to carve on their foreheads, showing they were “X’’ed out of society. Some live with endless regret.

Those who escaped taking part in the spasm of terror that snuffed out at least nine lives would seem to be lucky. But their lives have been linked forever to one of the craziest mass murders in history.

“Manson made a lot of victims besides the ones he killed,’’ said Catherine Share, who once lived with the Manson Family under the nickname “Gypsy.’’ “He destroyed lives. There are people sitting in prison who wouldn’t be there except for him. He took all of our lives.’’

It was 1969, the summer of the first moon landing. War was raging in Vietnam.

Hippies were in the streets of San Francisco, the last bastion of the counterculture movement.

For many, that summer is remembered for one thing - the most shocking celebrity murders to ever hit Los Angeles. Mention of the Sharon Tate murders or the name Manson four decades later is enough to make people shudder.

On the morning of Aug. 9, a housekeeper ran screaming from a home in lush Benedict Canyon. She had discovered a scene of unspeakable carnage. Five bodies were scattered around the estate.

The most famous, actress Sharon Tate, 26, the pregnant wife of director Roman Polanski, had been stabbed multiple times. But there were four others that day and two more the next.

On the front door the victims’ blood was used to scrawl the words “Death to Pigs.’’

The city was thrown into a state of fear. If that was not enough, a similar murder scene was discovered the next night.

Wealthy grocer Leno La Bianca, 44, and his wife, Rosemary, 38, were found stabbed to death in their home across town. A killer had carved the word “WAR’’ on Leno La Bianca’s body. The words “Helter Skelter’’ were written in blood on the refrigerator.

“These murders were probably the most bizarre in the recorded annals of American crime,’’ said Vincent Bugliosi, the former deputy district attorney who prosecuted the killers and wrote the book “Helter Skelter.’’

It would be more than three months before the name Charles Manson was linked to the crimes. And then the story became even weirder.

The discovery of Manson’s clan living in a high desert commune opened up the astounding story of a former convict who had gathered young people into a cult and ordered them to kill. His reasons still remain a subject of debate. Some say he wanted to foment a race war; others say it was senseless.

“It was a real-life horror story,’’ recalled Stephen Kay, who also prosecuted the Manson Family. “Manson is the real-life Freddie Kruger.’’

The former prosecutors worry that Manson, 74, is becoming a folk hero to a new generation. He is the subject of several websites, and Manson souvenirs are sold online.

“Evil has its lure and Manson has become a metaphor for evil,’’ said Bugliosi.

Those cult members lucky enough not to have killed for Manson on Aug. 9-10, 1969, have spent decades trying to bury their past and free themselves from his grasp.