Collider due to restart at half power

Nov. date planned for $10b machine 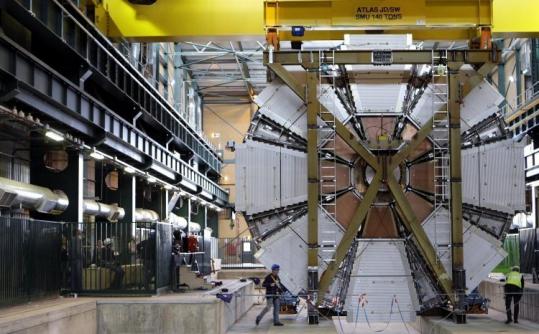 GENEVA - When launched to great fanfare nearly a year ago, some feared that the Large Hadron Collider would create a black hole that would destroy the world. The world’s largest scientific machine, built at a cost of $10 billion, has worked only nine days and has yet to smash an atom.

The European Organization for Nuclear Research, known as CERN, said yesterday that it would restart the collider in November at half power under pressure from scientists eager to conduct experiments to unlock secrets of the universe.

But spokesman James Gillies said they would have to shut down yet again next year to finish repairs so that the Large Hadron Collider can operate at full energy of 7 trillion electron volts - seven times higher than any other machine in the world.

CERN has been working since late last year to repair the damage caused by a faulty electrical joint.

The breakdown occurred nine days after the spectacular startup of the $10 billion machine last Sept. 10 when beams of subatomic particles were sent around the accelerator in opposite directions.

Fifty-three massive electrical magnets had to be cleaned and repaired after the failure in the 17-mile circular tunnel under the Swiss-French border at Geneva.

Tons of supercold liquid helium spilled out of the system, and a sooty residue had to be cleaned out of the tubes that are meant to be pristine, holding a vacuum in which subatomic particles can whiz around the tunnel at near the speed of light at temperatures colder than outer space.

CERN expects repairs and additional safety systems to cost about $37 million over the course of several years, covered by the 20-nation organization’s budget.

The CERN collider emerged as the world’s largest after the United States in 1993 canceled the Superconducting Super Collider being built in Texas. Congress pulled the plug after costs soared, and questions were raised about the value of the science it could produce.

Some people have questioned the cost of the CERN project, but Gillies says all 20 of CERN’s member nations have remained supportive and that four other countries - Cyprus, Israel, Serbia, and Turkey - have asked to join. A fifth country - Slovenia - has expressed interest.

Japan, India, Russia, and the United States are observer countries that have made sizable contributions to the CERN project.

Scientists have stressed that colliders always have startup problems and say that by running through this winter as planned CERN will be pretty close to schedule.

CERN is now aiming to restart the machine in November with beams of subatomic particles initially running at 3.5 trillion electron volts, or TeV. That’s only half the level the machine was designed for, but it’s still 3 1/2 times higher than the second most powerful accelerator, the Tevatron at Fermilab outside Chicago. During last year’s brief startup phase the CERN collider operated at only half the Fermilab level.