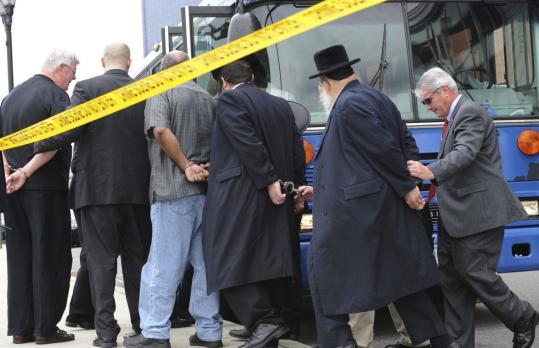 Agents led corruption case suspects from FBI headquarters yesterday in Newark. The number of arrests, 44, was remarkable even for New Jersey, where more than 130 public officials have pleaded guilty or been convicted of corruption since 2001. (Louis Lanzano/Associated Press)
By David M. Halbfinger New York Times / July 24, 2009

The case began with bank fraud charges against a member of an insular Syrian Jewish enclave centered in a seaside town. But when that man became a federal informant and posed as a crooked real estate developer offering cash bribes to obtain government approvals, it mushroomed into a political scandal that could rival any of the most explosive and sleazy episodes in New Jersey’s recent past.

It was replete with tales of the illegal sales of human organs; of furtive negotiations in diners and parking lots; of nervous jokes about “patting down’’ a man who turned out to indeed be an informant; and, again and again, of the passing of cash - once in a box of Apple Jacks cereal stuffed with $97,000.

“For these defendants, corruption was a way of life,’’ Ralph J. Marra Jr., the acting US attorney in New Jersey, said at a news conference.

The authorities laid out two separate schemes, one involving money laundering that led to rabbis and members of the Syrian Jewish community in Brooklyn and in the Jersey Shore town of Deal, where many of them have summer homes. The other dealt with political corruption and bribery and involved public officials mostly in Hudson County towns where the pace of development has been particularly intense in recent years.

Linking the two schemes was the federal informant who was not named in court papers but who people involved with the investigation identified as Solomon Dwek, a failed real estate developer and philanthropist who was arrested in May 2006 on charges of passing a bad $25 million check at a bank in Monmouth County, N.J.

Early on, Dwek led investigators to an extensive network of money launderers including rabbis in the Flatbush section of Brooklyn, where the Syrian Jewish community is based, and in Deal and Elberon, shore towns where many in the community spend their summers.

Dwek, a member of the Syrian Jewish community whose parents founded the Deal Yeshiva, never concealed that he was facing bank fraud charges, instead telling targets, which included three rabbis in Brooklyn and two in New Jersey, that he was bankrupt and trying to conceal his assets, according to people involved in the case. The targets, in turn, accepted bank checks Dwek made out to charities that they oversaw, deducted a fee, and returned the rest to him in cash.

Much of the cash came from Israel, where a man arrested as part of the inquiry yesterday said he obtained the money from a Swiss banker, prosecutors said. All told, some $3 million was laundered for Dwek since June 2007, prosecutors said.

Prosecutors say one of the accused money launderers, Moshe Altman, was a developer in Hudson County, and introduced Dwek to John Guarini, a building inspector in Jersey City, beginning the corruption phase of the case.

Guarini, who lost a bid for Congress in 2006, was charged with taking $40,000 in bribes from Dwek. From there, Dwek - now operating under an assumed identity, according to people involved in the case - branched out to a web of public officials, mayoral and council candidates, and their confidants.

Dwek told local officials in Jersey City, Hoboken, Ridgefield, Secaucus, and Bayonne that he was looking to build various projects and was seeking allies who would expedite the approval and make sure there were no obstacles. In exchange, he would offer $5,000 in cash for an upcoming campaign, or as a straightforward bribe, with the promise of more to come, and with earnest pleas that the requests be “taken care of.’’

Most of those arrested were public officials and included Mayor Peter J. Cammarano III of Hoboken, who was elected in June and who took office July 1, and Mayor Dennis Elwell of Secaucus, both Democrats; Assemblyman L. Harvey Smith of Jersey City, also a Democrat; and Assemblyman Daniel M. Van Pelt, a Republican from Ocean County. Van Pelt also serves as mayor of Ocean Township and administrator of Lumberton Township.

Smith, a former schoolteacher, ran for mayor of Jersey City in 2004 on an anti-corruption platform. He is charged with taking $15,000 in bribes.

As a result of the money-laundering scheme, the rabbis arrested included Saul Kassin, 87, the chief rabbi of the Syrian Jewish community in Brooklyn and New Jersey; Mordchai Fish and Lavel Schwartz, both rabbis in Brooklyn; and Eliahu Ben Haim and Edmund Nahum, who lead congregations in Deal.

Another man in Brooklyn, Levy-Izhak Rosenbaum, was accused of enticing vulnerable people to give up a kidney for $10,000 and then selling the organ for $160,000.