No repeat of the New Deal jump-start 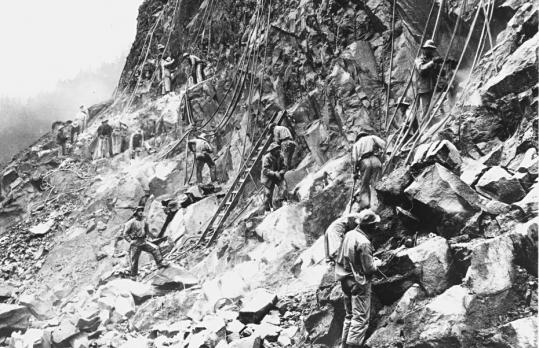 Men worked on the Bonneville Dam in Oregon in 1935. An army of 17,000 workers toiled to ensure an abundant supply of cheap electricity. (Oregon Historical Society)
By Alan Wirzbicki Globe Correspondent / July 20, 2009
Text size – +

BONNEVILLE DAM, Ore. - When President Franklin D. Roosevelt ordered immediate construction of the Bonneville Dam in 1933, he launched one of the world’s most ambitious engineering projects, one that would become an icon of the New Deal.

In less than four years, 17,000 around-the-clock workers tamed the roaring Columbia River, reshaping the economy of the Pacific Northwest by ensuring an abundant supply of cheap electricity. The New Deal even paid folk singer Woody Guthrie to pay homage to the dam that turned the region’s “darkness into dawn,’’ in the song “Roll On, Columbia.’’

Now, seven decades later, the Obama administration’s drive to spark another job-creating energy revolution through stimulus spending is off to a slower start - as reflected in the latest round of aid for the federal agency that runs the aging dam.

The Bonneville Power Administration received billions to expand its wind power grid. But only one of the envisioned transmission lines is underway, forecast to produce 700 jobs, and the others are years away from breaking ground.

In the end, the number of jobs created won’t come close to matching the army of impoverished loggers who signed on to mix concrete and install Bonneville’s massive turbines during the depths of the Depression.

The situation in Oregon, which has been hit hard by the recession and ranks third only to Michigan and Rhode Island in unemployment at 12.2 percent in June, is representative of larger concerns about Obama’s $787 billion stimulus plan: that times have changed to the point where no president can funnel money into infrastructure spending quickly enough to provide the major economic jolt that stimulus supporters promised.

Indeed, while Roosevelt ordered the construction of Bonneville Dam and other huge public works projects with the stroke of a pen, officials embarking on big infrastructure projects today find their hands tied in ways that were unheard of in the 1930s.

“Just the requirements of the National Environmental Policy Act would make it impossible to do what Roosevelt did,’’ Wright said, referring to rules that require the agency to complete lengthy environmental impact reviews and hold public hearings before breaking ground on a project.

Obama administration officials insist that the stimulus plan is beginning to work, and backers say the energy efforts in the Northwest have the potential to revolutionize energy policy in the same way that Roosevelt’s dam did in the 1930s.

But overall, the infusion of federal cash into construction, healthcare, energy, and tax cuts has failed to match the Obama administration’s predictions for job creation. When the program was under debate in January, the administration predicted it would keep unemployment below 8 percent, but the national jobless rate rose to 9.5 percent last month, and many economists now expect it to hit double digits.

Responding to concerns about the pace of the stimulus, the administration announced last month it would speed up spending in some areas, and officials say they are under pressure from the administration to put people to work quickly. Wright said he had been told by his boss, Secretary of Energy physicist Steven Chu, that while it was physically impossible to spend at light speed, he should aim to deploy stimulus money at “the 99th percentile of the speed of light.’’

However, the slower than expected rate of job creation has given ammunition to the plan’s Republican critics, who say the administration exaggerated the employment potential of the stimulus in order to ram a list of liberal spending priorities through Congress.

“What Democrats passed into law in February was not a stimulus plan; it was a government spending plan. They promised that it would create jobs immediately, yet we’ve continued to see literally millions of jobs lost over the last four and five months,’’ said Kevin Smith, a spokesman for House GOP Leader John Boehner, one of the most vocal opponents of the stimulus plan.

Environmental reviews are not the only cause of delay on stimulus energy projects in the Northwest, where the hilly terrain east of the Cascades offers some of the nation’s most ideal geography for wind power, and where the Bonneville Power Administration eventually hopes to get 40 percent of the region’s power from wind.

A separate provision of the stimulus was supposed to provide $6 billion in loans to private companies to spur construction of more windmills, but the rules have been bottled up in Washington amid a dispute over how to administer the program. A Department of Energy spokeswoman, Ebony Meeks, said the loan program is still under development.

Ironically, many of the limits placed on big construction projects are legacies of the reaction against New Deal-style projects. Bonneville and the other dams on the Columbia were built with little transparency and virtually no regard for the havoc they eventually caused for the river’s ecology. The dams decimated the salmon population and destroyed Native American fishing grounds - a cultural and environmental toll that inspired its own artistic legacy in Ken Kesey’s 1962 novel “One Flew Over the Cuckoo’s Nest.’’

For many rural areas in the Pacific Northwest, however, the completion of Bonneville was an economic windfall that is still remembered fondly.

Gordon Hilderbrand, 80, a wheat farmer from Wasco, a town of barely 400 residents that got electricity for the first time because of the New Deal, attended the dam’s dedication ceremony in 1937 with his father, sitting in the front row to watch Roosevelt open the dam’s powerhouse. Roosevelt had promised to build the dam as part of his 1932 campaign, a vow that helped him sweep the Northwest.

“It was the first time my father voted for a Democrat,’’ Hilderbrand recalled, “and the last time.’’

Having witnessed one energy revolution in the region, Hilderbrand has a unique perspective on another: Ten years ago he began renting out parts of his vast 17,000-acre farm to Iberdrola, a Spanish company that runs several wind farms in the Northwest and hopes to build more if Bonneville can provide the transmission capacity. The wind turbines, Hilderbrand said, are more profitable than wheat in many years.

Don Furman, Iberdrola’s vice president for development, said that the electrical grid was nearing the limit of how much wind power it could reliably handle, and that new transmission capacity is desperately needed if the administration wants to meet its stated goal of doubling wind power usage by 2012.

“There are areas in the Northwest that have very good wind resources that we can’t bring to market,’’ he said. “We are running up against the possibility of shutdowns.’’

While crediting the Obama administration with getting behind wind power, he said the slow speed with which the stimulus money is being spent is disappointing.

“There was a real belief that stimulus money would be paid out quickly from the federal government,’’ he said. “It’s been much slower than we hoped.’’