Ties among Anglicans may be strained further 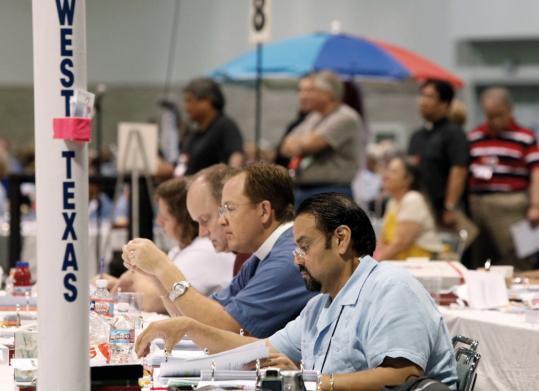 Episcopal Church officials voted yesterday to allow bishops the latitude to bless same-sex unions - the second vote this week in favor of gay rights and one that may further divide the worldwide Anglican community.

Capping a national convention in Anaheim, Calif., officials stopped short of creating liturgical rites to bless same-sex unions, but approved a compromise measure that allows bishops, especially in states where same-sex unions are legal, to bless the relationships. The key portion of the legislation says bishops “may provide generous pastoral response’’ for such unions.

The vote came three days after the church passed a resolution allowing for the ordination of gay bishops. Both moves have prompted strong reactions among the larger worldwide Anglican Church, of which the Episcopal Church is a part.

Archbishop of Canterbury Rowan Williams, the preeminent Anglican clergyman, had asked the Episcopalians before the convention not to take up issues that would further divide the church. This week, the bishop of Durham, England, wrote an essay describing the most recent actions of the Episcopal Church as marking “a clear break with the rest of the Anglican Communion.’’

Meanwhile, gay rights advocates said this week’s victories lay the groundwork for future moves. The resolution included a call for bishops to “collect and develop theological and liturgical resources’’ on same-sex unions to report to the next convention. Three years from now, they may consider creating a standard liturgy for same-sex unions with the eventual goal of including a rite for gay marriage in the church’s prayer book.

Mike Angell, who is studying to become an Episcopal priest at the Virginia Theological Seminary, said yesterday’s decision comes as a relief. “I have a number of friends - straight and gay - who requested me to perform their weddings once I’m ordained,’’ said Angell. “I would have felt limited and compromised blessing hetero couples but not gay couples.’’

The church’s recent moves could also have a wider influence on denominations that are watching how the issue of homosexual clergy and marriage plays out among Episcopalians.

“These actions could show other denominations that progress can be made without destroying the church,’’ said Harry Knox, religion and faith director at the Human Rights Campaign, the nation’s largest gay rights group.

But some believe the recent moves have come at a cost. A number of parishes and dioceses have left the 2.3-million-member Episcopal Church and affiliated with overseas branches of the Anglican Communion. Last month, some conservatives who left the Episcopal Church over issues of Scripture and sexuality formed the Anglican Church in North America.

The Rev. Ian Douglas, a scholar of Anglicanism at Episcopal Divinity School in Cambridge, Mass., said he realized the resolution could “cause turmoil,’’ but he believed the church was “being faithful to God and Jesus Christ and the Holy Spirit.’’

“Some will want to cast this decision as a choice between our faithfulness to God and our place in the Anglican Communion,’’ he said. “I pray that our service to God’s mission of reconciliation will keep us together.’’

George Wing, a delegate from the Diocese of Colorado, said he worries that the church’s liberal direction has caused active churchgoers to leave. “The most dedicated of the young people are evangelicals. They’re gone, and they’re not coming back,’’ Wing said.