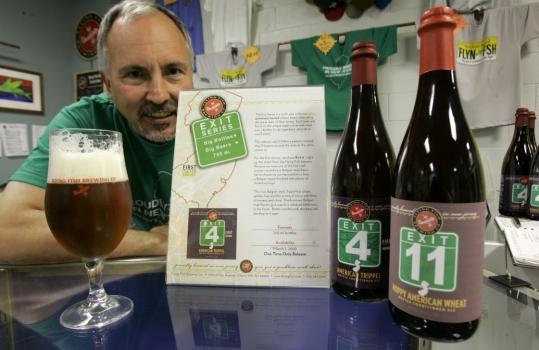 CHERRY HILL, N.J. - A New Jersey brewery is using the state’s congested and often-derided turnpike to promote its beer, an idea that concerns the New Jersey Turnpike Authority and a group that opposes drinking and driving.

Cherry Hill-based Flying Fish Brewing Co. (motto: “Proudly Brewed in New Jersey: You Got a Problem with That?’’) has undertaken an ambitious project of releasing a special beer in honor of turnpike exits, one at a time.

The beers are being made in limited runs and sold in 750 milliliter wine-size bottles.

The first, a Belgian-style ale, came out earlier this year in honor of Exit 4, the exit nearest the suburban Philadelphia industrial park that Flying Fish calls home.

The next beer, Exit 11 Hoppy American Wheat Ale, is scheduled to start hitting bars and stores in the region on July 15. The intersection of styles is a tribute to Woodbridge’s exit, where the Turnpike meets the Garden State Parkway.

Joe Orlando, a spokesman for the New Jersey Turnpike Authority, said it’s a bad idea to associate a highway with alcohol. Flying Fish has answered the authority’s concerns with disclaimers that the beer isn’t endorsed by the authority.

“There’s been a brokered peace here,’’ Orlando said. “But don’t expect to see it in any of our rest areas.’’

That doesn’t satisfy Mindy Lazar, executive director of New Jersey’s chapter of Mothers Against Drunk Driving. “The combination of a roadway and advertising for any kind of a beer doesn’t make any kind of sense,’’ she said. “This is almost a mockery.’’

Brewery president Gene Muller said that’s not the case. “The one thing that both of us agree is drinking and driving is never an option,’’ he said.

Muller, who founded Flying Fish in 1995 and has overseen its growth into the biggest New Jersey-based brewery, said he’s not sure if all 29 exits will get their own beers.

Muller said he hopes fans will help come up with future beer concepts linked to the exits. He said initially he wanted to have each beer’s alcohol content match the exit number - Exit 6 beer, for instance, would have 6 percent alcohol. Most beers have about 5 percent alcohol.