Businesses aim to get tourists to spend more 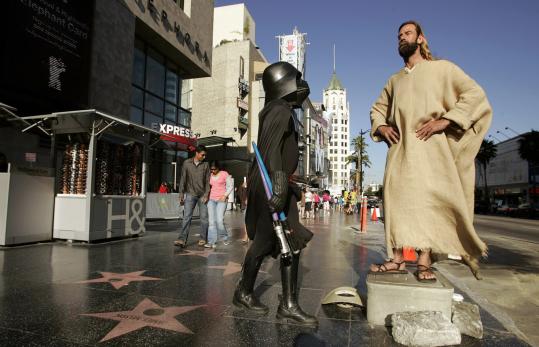 Costumed characters on Hollywood Boulevard are having a hard time getting tips because tourists have cut back on spending. (Mel Melcon/ Los Angeles Times)
By Hugo Martin Los Angeles Times / June 7, 2009
Text size – +

LOS ANGELES - Somewhere between Debbie Reynolds and Jack Benny, the Laitala family of Duluth, Minn., stopped to marvel at the throngs of tourists shuffling among the sidewalk stars of Hollywood Boulevard.

Joel Laitala, a mechanic, focused his camera on a star in the pavement while his wife, Lori, watched as costumed characters - Superman, Captain Jack Sparrow, and Homer Simpson - posed for photos with tourists for tips.

Every day, visitors from around the world flock to the hot sites of Hollywood, the historic birthplace of America's entertainment industry. But this year, crowds are smaller, tourist spending is down, and merchants are nervous.

The Laitala family was typical of today's visitors. They were scrimping. They avoided trinket shops, theme parks, and expensive eateries. They planned to buy food at a grocery store and spend most of their visit to Los Angeles at the beach or the zoo.

"We are definitely holding back," Lori Laitala said, citing the high cost to feed and entertain her three boys.

But the slumping economy has taken some of the sparkle off Tinseltown, ranked as one of the most visited tourist destinations in the world. Grauman's Chinese Theater alone attracts about 4 million visitors a year, more than the Empire State Building in New York and the Palace of Versailles in France.

With fears of layoffs, foreclosures, and failing banks, today's Hollywood visitors are tightfisted when spending on food, tips, and souvenirs.

In a January survey, 32 percent of Hollywood merchants said business in 2008 was down significantly or moderately, with restaurants taking the biggest hit, a drop in sales of nearly 25 percent, said Leron Gubler, president of the Hollywood Chamber of Commerce.

The pain of such frugal spending has been felt by waiters, tour bus drivers, and souvenir shop owners, many of whom are calling it Hollywood's worst year for tourism since the 2001 terrorist attacks.

At Mel's Drive-In, the iconic '50s-themed restaurant adjacent to the Hollywood History Museum, waiters and busboys were laid off when business dropped in recent months.

"It used to be a madhouse at night, with lines out the door," restaurant manager Gannon Grace said. "Now it's like this," he said, motioning to a half-empty diner.

Even foreign visitors, who account for about 30 percent of Hollywood's tourism, are cutting back. Jenny and Bob Minns, a retired couple from Norfolk, England, took a tour bus across the United States, finishing in Hollywood. To save money, they planned to skip expensive restaurants and pass over the bus tours of celebrity homes. "I can see them better on the telly," Bob Minns said.

Hollywood businesses have responded with price cuts and discounts. For example, the Hollywood Wax Museum, the Guinness World Record Museum, and Ripley's Believe It or Not! have teamed up to offer a $26.95 pass to visit all three sites. Also, Starline tours offers $5 discounts to tourists who buy tickets online.

Now Hollywood is waiting on a happy ending. Hollywood merchants are betting this summer season will draw visitors back, particularly locals who will stay closer to home to save money.

Next year, a 500-seat Hard Rock Cafe is scheduled to open at the Hollywood and Highland complex, bringing with it another tourist magnet to the busy intersection.

Cirque du Soleil, the acrobatic circus, is scheduled to launch a show at the Kodak Theater in 2011. This month, a refurbished Vine Theater, near the corner of Hollywood and Vine, will open a Laserium light show to draw families and tourists.

The biggest attraction to open this summer will be Madame Tussauds celebrity wax museum, set to launch in August next to Grauman's Chinese Theater.

The $55 million project replaces a parking lot on one of the busiest street corners in Hollywood. The three-story glass-and-concrete structure will house 115 wax figures, depicting celebrities such as Beyoncé, Tom Cruise, and Arnold Schwarzenegger.