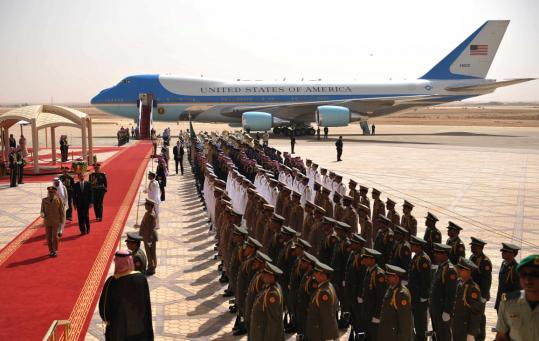 RIYADH, Saudi Arabia - President Obama began his Middle East trip yesterday in "the place where Islam began" as the administration took extraordinary steps to make sure his speech in Cairo today is heard around the world, including offering instant text-messaging of the address in four languages, creating special links on popular social networking sites, and facilitating its live broadcast on a number of national television networks.

As Obama arrived in this desert capital, senior US officials said the president would discuss Muslim and American misperceptions and specific policies on both sides that have undermined relations.

The attention surrounding Obama's address and his first visit to Saudi Arabia was underscored yesterday by a pair of messages from Osama bin Laden and his Egyptian deputy, Ayman al-Zawahiri.

Shortly after Obama landed, the Arab satellite network Al Jazeera aired a recording of bin Laden sharply criticizing US policy in Pakistan and accusing Obama of planting seeds for "revenge and hatred" in the Muslim world. The message said Obama is following President George W. Bush's policy of "antagonizing Muslims," and bin Laden warned Americans of "consequences" to come. US officials did not dispute the recording's authenticity, although bin Laden, once a Saudi citizen, has not been seen for years.

A day earlier, Zawahiri urged Egyptians to shun Obama during his visit, saying his trip was at the invitation of the "torturers of Egypt" and the "slaves of America." Zawahiri, a doctor by training, was imprisoned in Egypt for his radical Islamist political beliefs until 1984.

Briefing reporters here, Robert Gibbs, White House press secretary, said, "I don't think it's surprising that Al Qaeda would want to shift attention away from the president's historic efforts and continued efforts to reach out and have an open dialogue with the Muslim world.

"I think Americans have seen these types of threats before," said Gibbs, who called it "an effort to upstage and to try to become a part of a story seeking a different way."

Saudi Arabia's oil wealth and supreme importance to Muslims as the site of Mecca and Medina have long made it a major player in Middle East diplomacy, and Obama arrived seeking early progress on Israeli-Palestinian peace efforts and in curbing Iran's nuclear program.

At a tarmac welcoming ceremony, Obama was met by King Abdullah, the 84-year-old Saudi leader. The leaders then headed to Abdullah's farm at Jenadriyah, not far from Riyadh, for meetings. Obama noted that he "thought it was very important to come to the place where Islam began and to seek His Majesty's counsel and to discuss with him many of the issues that we confront here in the Middle East."

In a statement, the White House said the leaders discussed Iran's nuclear program, the Israeli-Palestinian conflict, the situation in Afghanistan and Pakistan, and Obama's impending speech. In recent years, Abdullah has asserted Saudi diplomacy aggressively in Lebanon and in the Israeli-Palestinian conflict. He was the first to propose broad Arab recognition of Israel in return for its withdrawal from all territory occupied in the 1967 Middle East War, and he has sought in the past to broker unity government agreements between rival Palestinian factions Hamas and Fatah. Obama has suggested that Abdullah's peace proposal, adopted by the Arab League in 2002 and now known as the Arab Peace Initiative, might serve as a way to revive talks between Israelis, Palestinians, and Arab countries, only two of which now recognize the Jewish state.

For today's speech, Gibbs said, the State Department is offering short message service in Urdu, Farsi, Arabic, and English, allowing people to receive the speech in real time and comment on it. The White House website will carry it live, and transcripts will be available in 13 languages.

The White House will also sponsor links to the speech on social networking sites such as MySpace, Twitter, and Facebook, which Gibbs said has 20 million users in Muslim countries. Gibbs called the efforts "far broader" than previous ones.

The speech is the latest in a series of overtures Obama has made to the Islamic world since taking office.

Those include giving his first presidential interview to an Arabic-language satellite station, sending a Persian New Year's greeting to Iran, and proclaiming in Turkey that the "United States is not, and will never be, at war with Islam."