From portraits to oddities, depictions of Obama in demand 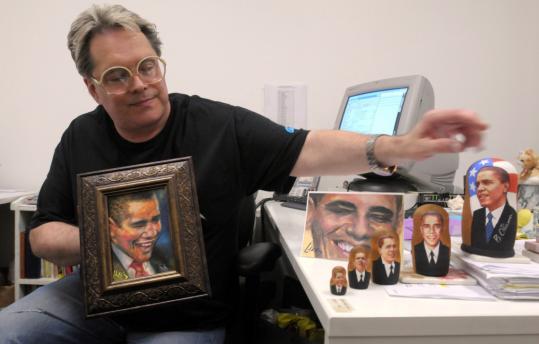 ''This is historic and you want something that feels like an heirloom,'' said Gary Rogers Wares, explaining why he has purchased original paintings of President Obama. (Axel Koester/ New York Times)
By Randy Kennedy New York Times / May 31, 2009
Text size – +

NEW YORK - Mimi Torchia Boothby's job as a technician puts her outside a wind tunnel weekdays at the plant south of Seattle, but in her free time she paints watercolors.

Among her favorite subjects are cats, scenes of Italy - and, of course, Barack Obama, whose contemplative, sun-splashed portrait she completed a few weeks after his election as president.

She was so happy with it she started offering prints on the Web, her first proud professional act as an artist, and has since sold more than two dozen at $40 apiece. "Most of the people who bought them were people I didn't even know."

Perhaps not since John F. Kennedy, whose portraits can still be seen in kitchens and barbershops, has a presidency so fanned the flames of painterly ardor. Obama's campaign was well known for inspiring art, including Shepard Fairey's "Hope" poster, a copy of which is now in the National Portrait Gallery in Washington, D.C.

Months after the election, it might have been expected that enthusiasm for Obama art would be dimming. Yet the still-ample offerings of original paintings of the president and the first family on and at places like the annual Affordable Art Fair in New York - along with a crop of Internet sites including www.obamaartreport.com, www.artofobama.com, and, inevitably, www.badpaintingsofbarackobama.com - are indications that it might just be a growth industry.

The phenomenon has been a boon to the near-anonymous painting factories in the suburbs of Shenzhen, China, famous for cranking out copies of masterpieces, along with landscapes and semitasteful nudes. Another one, seemingly based in Germany, offers stately Obamas amid likenesses of Tupac Shakur, Bruce Lee, and Al Pacino.

Interest has also helped artists of limited renown like Dan Lacey, of tiny Elko, Minn., a self-described disillusioned conservative who made a name for himself last year in the blogosphere with his inexplicably strange portraits of Senator John McCain and Alaska Governor Sarah Palin depicted with pancakes stacked on top of their heads.

Lately, he has turned to Obama, cranking out both eBay-ready conventional portraits and stranger works that have tended toward portrayals of the 44th president naked on a unicorn, often performing gallant deeds like wrestling a bear on Wall Street.

"There's a consistent demand for Obama, both for things that are funny and also for the serious sort of Aaron Shikler kinds of treatments," said Lacey, referring to the artist who painted portraits of the Kennedy family.

Among Lacey's eBay customers are Carla Pasley, of Kansas City, Mo., who said she is generally apolitical but bought an Obama portrait simply because she found it "really pretty," and Gary Rogers Wares, of Culver City, Calif., who has a gold-hued Obama in his office.

"I wanted a painting because it's something unique, and as far as I'm concerned it's unique, just like our president is," Wares said. "This is historic and you want something that feels like an heirloom."

The White House, asked if the president and first lady commonly received gifts of paintings of themselves, responded with characteristic reticence: "On background, I can pass along that among other things, the Obamas are given works of art that include images of the president and symbols from the campaign," a spokesman wrote.

If Obama has not yet fixed the economy, he at least seems to have postponed the withering of original art's "aura," or power, in a world of easy reproduction, as famously foreseen by the philosopher Walter Benjamin.

Indeed, a search by eBay under the category of Obama paintings, most of them original creations, found 787 works offered for sale from mid-February to mid-May, generating almost $20,000 at an average price of $118 a painting, said Karen Bard, a spokeswoman.