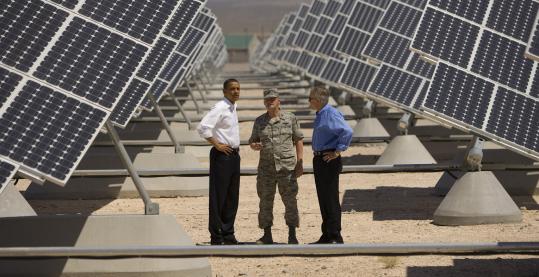 President Obama refocused on the economy yesterday, asserting that at its 100-day mark, his $787 billion stimulus bill is already paying dividends, and that the economy is showing some promise.

"One hundred days ago, in the midst of the worst economic crisis in half a century, we passed the most sweeping economic recovery act in history - a plan designed to save jobs, create new ones, and put money in people's pockets," Obama said on a two-day western swing that was bracketed by big-dollar Democratic fund-raisers Tuesday night in Las Vegas and last night in Los Angeles. "And 100 days later, we're already seeing results."

Obama vowed the stimulus would save or create 3 million to 4 million jobs over the next two years when he pushed it through Congress in February.

Republicans, who fought hard to block the stimulus bill, asserted that it was not having the intended effect, and that billions of dollars were being wasted. House GOP leader John Boehner's office accused Obama of "pulling out all the stops to put a positive spin on the legislation."

Obama seeks to review how secrets are classified
WASHINGTON - President Obama yesterday ordered a review of how the nation keeps and classifies its secrets and instructed his top administration officials to lean toward disclosure when they can.

"While the government must be able to prevent the public disclosure of information where such disclosure would compromise the privacy of American citizens, national security, or other legitimate interests, a democratic government accountable to the people must be as transparent as possible and must not withhold information for self-serving reasons or simply to avoid embarrassment," Obama said in a memo released from the White House.