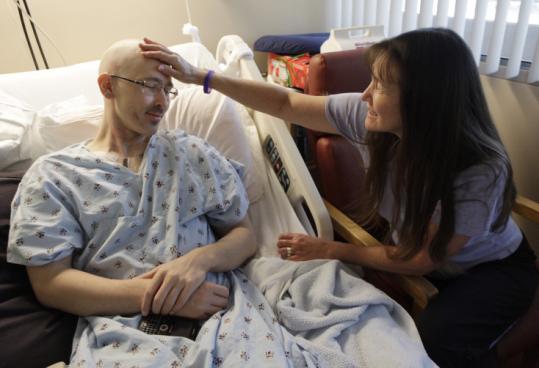 HAYWARD, Calif. - If Nick Glasgow, 28, were white, he would have a nearly 90 percent chance of finding a matching bone marrow donor who could cure his leukemia.

But because the bodybuilder is one-quarter Japanese, his doctor warned him the outlook was grim. Glasgow's background would make it almost impossible to find a match, which usually comes from a patient's own ethnic group.

The doctor "didn't say it was slim-to-none. He didn't say it would be hard. He said 'zero chance,' " Glasgow's mother, Carole Wiegand, recalled with tears in her eyes. "When Nick heard that, it sent him plummeting."

At a time when the number of multiracial Americans is rising, only a tiny fraction of donors on the national bone-marrow registry are of mixed race. The National Marrow Donor Program is trying to change that by seeking more diverse donors for patients suffering from leukemia, lymphoma, and other blood diseases.

"The truth is, when people of different backgrounds marry and produce offspring, it creates more types that are harder to match," said Michelle Setterholm, the program's director of scientific services. "The probability just gets lower when you have people of mixed ancestral DNA."

The number of people who identify themselves as multiracial in the United States has grown from 3.9 million in 2000, the first year the census included the category, to 5.2 million in 2008. Mixed-race people account for 1.6 percent of the US population.

The donor program has been pushing for years to recruit more racial minorities and mixed-race donors. So far, multiracial volunteers make up just 3 percent of the 7 million people on the registry.

That is higher than the percentage of mixed-race people in the United States. But there are so many possible racial and ethnic combinations that finding a match can still be extremely difficult.

The reason that mixed-heritage patients are so hard to match can be found in the immune system.

Populations in different parts of the world developed certain proteins, or markers, that are part of the body's natural defenses. These markers help the immune system determine which cells are foreign and should be rejected.

A match between two people who share many markers will reduce the risk of the donor and recipient cells attacking each other. Because certain markers tend to cluster in particular ethnic groups, matches are most often found among people of shared backgrounds. Multiracial patients often have uncommon profiles and a much harder time finding a donor.

About 6,000 patients in the United States are awaiting a bone marrow match.

Finding compatible organs for transplant is simpler. Organ matches rely essentially on blood type, which is not related to race.