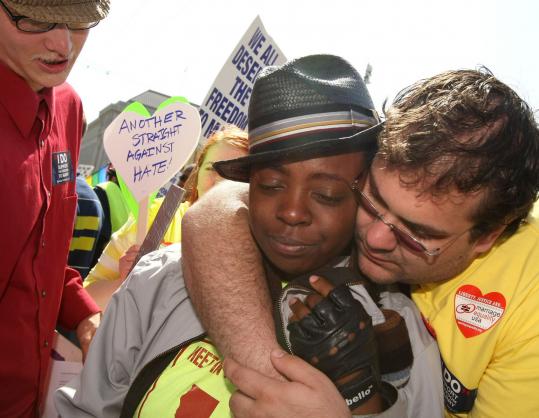 SAN FRANCISCO - The California Supreme Court yesterday upheld Proposition 8's ban on same-sex marriage but also ruled that gay couples who wed before the election will continue to be married under state law.

The decision virtually ensures another fight at the ballot box over marriage rights for gays. Gay rights activists say they may ask voters to repeal the marriage ban as early as next year, and opponents have pledged to fight any such effort. Proposition 8 passed with 52 percent of the vote.

Although the court split, 6 to 1, on the constitutionality of Proposition 8, the justices were unanimous in deciding to keep intact the marriages of as many as 18,000 gay couples who exchanged vows before the election. The marriages began last June, after a 4-to-3 state Supreme Court ruling striking down the marriage ban last May.

Justice Ronald M. George, writing for the majority, said Proposition 8 did "not entirely repeal or abrogate" same-sex couples' right to privacy and due process or the "constitutional right of same-sex couples to 'choose one's life partner and enter with that person into a committed, officially recognized, and protected family relationship.'

"Instead, the measure carves out a narrow and limited exception to these state constitutional rights."

In an allusion to the state's domestic partners law, George noted that Proposition 8 left undisturbed "all of the other extremely significant substantive aspects of a same-sex couple's state constitutional right to establish an officially recognized and protected family relationship and the guarantee of equal protection under the laws."

In addition to rejecting the gay-rights lawyers' contention that Proposition 8 was an illegal constitutional revision, the court also flatly discarded state Attorney General Jerry Brown's argument that the measure was unconstitutional because it affected an "inalienable right."

But the court said "well-established legal principles" require that Proposition 8 be applied only prospectively, leaving intact same-sex marriages that occurred before the November election.

"The marriages of same-sex couples performed prior to the effective date of Proposition 8 remain valid and must continue to be recognized in this state," George wrote.

Justice Carlos R. Moreno, in the lone dissent, warned that yesterday's ruling "places at risk the state constitutional rights of all disfavored majorities."

"It weakens the status of our state Constitution as a bulwark of fundamental rights for minorities protected from the will of the majority," wrote Moreno, the court's only Democratic appointee.

Justice Joyce L. Kennard, who joined the majority last year in giving gays the right to marry, said in a separate opinion that Proposition 8 was not sweeping enough to be a constitutional revision, which can only be placed on the ballot by a two-thirds vote of the Legislature.

Noting, as the majority opinion did, that judges must set aside their personal views, Kennard said the court was required to follow the state Constitution and the court's previous rulings.

"And when the voters have validly exercised this power, as they did here, a judge must enforce the constitution as amended," Kennard wrote.

Justice Kathryn Mickle Werdegar, a former civil rights lawyer who also joined last year's ruling in favor of marriage rights, wrote separately because she disagreed with the majority's definition of a constitutional revision.

"The drafters of our Constitution never imagined, nor would they have approved, a rule that gives the foundational principles of social organization in free societies, such as equal protection, less protection from hasty, unconsidered change than principles of government organization," she wrote.

The court declined to determine whether same-sex marriages performed outside of California - and not formally recognized by the state prior to the election - would be legal in California. The court said it did not hear arguments on that question and "it would be inappropriate to address" it after announcing yesterday's decision.

The case for overturning the initiative was widely viewed as a long shot. Gay rights lawyers had no solid legal precedent on their side, and some of the court's earlier holdings on constitutional revisions mildly undercut their arguments.

But gay marriage advocates captured a wide array of support in the case, with civil rights groups, legal scholars and even some churches urging the court to overturn the measure. Supporters of the measure included many churches and religious organizations.

The legal fight over same-sex marriage in California began in San Francisco in 2004, when Mayor Gavin Newsom spurned state law, and the city began issuing marriage licenses to gay couples. Long lines of couples showed up to marry and celebrated within view of the court with rice and champagne.

Those marriages sparked a national debate about gay rights and made the marriage question a political issue. Dozens of states later adopted constitutional amendments to bar same-sex marriage.

Those gay couples who wed in San Francisco later had their marriages rescinded by the California Supreme Court, which ruled that a city could not single-handedly flout state law. But the court said supporters of marriage rights could challenge the ban in the lower courts.

The legal fight moved to San Francisco Superior Court, where a judge struck down the marriage ban as unconstitutional. A Court of Appeal in San Francisco later overturned that decision on a 2-to-1 vote. The state Supreme Court eventually took up the case, which culminated in a May 15 ruling last year declaring gays could marry each other.

Before last fall, California was one of only two states - the other was Massachusetts - to permit same-sex marriage.

Iowa, Connecticut, Vermont, and Maine have since legalized it, and lawmakers in New York, New Jersey, and New Hampshire are considering bills of their own.