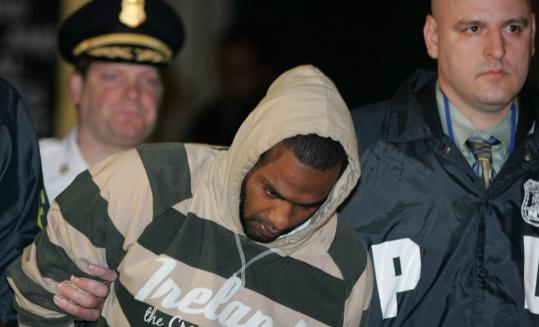 David Williams was taken by police from a federal building in New York yesterday after being arrested on charges related to a plot to bomb two synagogues. Federal officials also arrested and charged three other men in connection with the alleged conspiracy. (Robert Mecea/Associated Press)
By Michael Wilson New York Times / May 22, 2009
Text size – +

NEW YORK - They were four ex-convicts - one a crack addict, another whose most recent arrests involved snatching women's purses -and they gathered their terror tools as they went.

They bought cellphones, the authorities said; they bought a camera in a Wal-Mart to take photographs of the synagogues in New York City that they wanted to blow up. When their attempts to buy guns in Newburgh, N.Y., fell through - their gun dealer told them she had sold out - they drove downstate, buying a $700 pistol from a Bloods gang leader in Brooklyn.

After months of planning, the authorities allege, the men had their first real scare this month, driving to Connecticut to pick up a surface-to-air missile that was waiting for them in a warehouse.

One of the men in the car - on parole for a drug conviction - was sure they were being followed by law enforcement, so they turned around, lost their suspected tail, and eventually went back to Stamford for their missile and bombs.

They brought them back to Newburgh, locked them in a storage container, and celebrated, shouting, "Allah Akbar!"

These details as told by the authorities describe a homegrown terror plot to bomb two synagogues in the Bronx and shoot down a military aircraft in Newburgh. The outlines of the plan were more fully filled in yesterday, in court hearings, documents and interviews, as were bits and pieces of the checkered life stories of the four men charged in the plot.

Remarkably, vast passages of the conspiracy federal authorities described - the talk of killing Jews, the testing of the men's would-be weaponry - played out on a veritable sound stage of hidden cameras and secret microphones, and involved material provided by the FBI. A house in Newburgh, a storage facility in Stamford, the planting of the would-be bombs in the Riverdale section of the Bronx - everything was recorded, according to the complaint.

"It's hard to envision a more chilling plot." Eric Snyder, an assistant US attorney, said yesterday in federal court in Manhattan."These are extremely violent men. These are men who eagerly embraced an opportunity to bring deaths to Jews."

The investigation began with the work of a confidential informant, who portrayed himself as an agent of a Pakistani terror organization, and who became a critical member of the men's plot. The full nature and extent of the informant's role in facilitating the plot is unknown.

In other cases, defense lawyers have sought to portray these informants as engaging in entrapment, suggesting they had,in effect, provoked and fueled the actions of their clients.

But where past terror prosecutions have been based mostly on conversations about a planned or imagined attack, this one went further, the authorities alleged: The men went through critical acts in what they believed to be a deadly assault.

As for the defendants - James Cromitie, 45; David Williams, 28; Onta Williams, 32, and no apparent relation to David; and Laguerre Payen, 27 - most of the details that emerged yesterday stemmed from their criminal pasts.

David Williams was described as particularly violent by prosecutors yesterday. When the plan to buy guns from a woman in Newburgh fell through, it was David Williams who quickly improvised, arranging to buy a gun from a man he described as a "supreme Blood gang leader" in Brooklyn, said Snyder. After buying the gun in the company of the informant, David Williams said he would have shot the gang leader if he were alone with him, and kept his $700.

Payen, described as a nervous, quiet sort who took medication for schizophrenia or a bipolar disorder, was unemployed and living in squalor in Newburgh. His last arrest, in 2002, was for assault, after he drove around the Rockland County village of Monsey firing a BB-gun out the window - striking two teens - and snatching two women's purses.

Onta Williams had been hooked on cocaine since he was a teenager, according to testimony at a 2003 court hearing.

Cromitie has spent 12 years in prison, most recently for selling drugs to undercover officers behind a school.

Payen reported himself to be Catholic during his 15-month prison sentence that ended in 2005, according to a state corrections official. Cromitie and Onta Williams both identified themselves as Baptists in prison records, although Cromitie changed his listed religion to Muslim upon his last two incarcerations; David Williams reported no religious affiliation.

The men never served in the same prison together. Three of them regularly lunched together at Danny's Restaurant in Newburgh, chatting over plates of rice and beans, said Danny DeLeon, the owner.