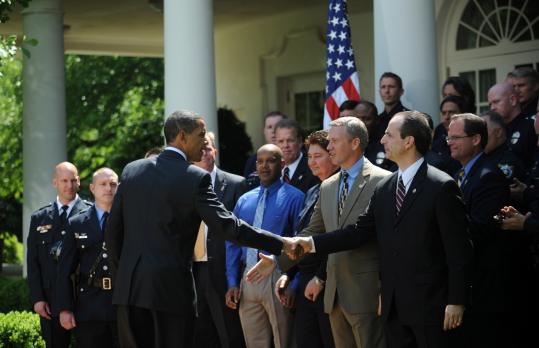 PAT ON THE BACK FOR POLICE - President Obama honored the winners of the National Association of Police Organizations' ''Top Cops'' awards yesterday at the White House. Obama said billions of dollars is being sent to states and cities to pay police salaries. (Tim Sloan/Afp/Getty Images)
May 13, 2009
Text size – +

Miss California Carrie Prejean and Miss USA pageant owner Donald Trump yesterday both defended the much-discussed answer she gave at the Miss USA event - that marriage should be between one man and one woman - by asserting that it is the same as President Obama's stand on the issue.

Obama has supported equal benefits and civil unions for same-sex couples, but has opposed gay marriage. "I believe marriage is between a man and a woman. I am not in favor of gay marriage," he said in an MTV interview just before last November's election.

After Trump announced yesterday that Prejean will get to keep her crown despite a series of racy photos, she claimed she had been unfairly criticized for speaking from her heart and using her constitutional right to free speech. "That should not happen in America," she said, her voice breaking with emotion, at a news conference given wall-to-wall coverage by the cable networks.

Prejean jumped into the fray herself by helping unveil a TV ad campaign launched late last month by the National Organization for Marriage criticizing her critics. "I've become an advocate for not redefining marriage," she said yesterday.

Catholic petition backs Obama at Notre Dame
A Boston-based group of Catholics started an online petition yesterday to build support for Notre Dame's invitation for President Obama to give the commencement speech on Sunday.

That decision has been criticized by bishops and others who oppose honoring Obama when his positions on abortion and stem cell research in particular conflict with church teachings.

But Catholic Democrats launched a website that includes a "statement of support" praising Catholic colleges that "thoughtfully engage students - and indeed all Catholics - to think critically about matters of faith and public policy." The site also includes a video that highlights Obama's faith and polls that show Catholic support for him.

"Our network of supporters across the country have joined together in support of excellence in Catholic higher education, and of Notre Dame in particular, against the kind of extremist attacks we've all heard," Patrick Whelan, president of Catholic Democrats, said in a statement. "We are providing another perspective - one that reflects the mainstream view of Catholics - to shed light on this fabricated controversy."

MADD executive drops out of running for highway post
WASHINGTON - The CEO of Mothers Against Drunk Driving, who was chosen to oversee a federal highway safety agency, has withdrawn his name for the post, the White House said yesterday.

The Obama administration said last month that it intended to nominate Chuck Hurley to become the administrator of the National Highway Traffic Safety Administration.

The White House and MADD declined to comment on Hurley's reason for withdrawing. But some environmental groups had questioned Hurley's commitment to tougher fuel efficiency requirements and his ties to automakers. MADD has received funding from several auto companies, including , , , and others.

Senator David Vitter had put a hold on confirming Craig Fugate at the Federal Emergency Management Agency until FEMA officials provided answers on several lingering questions involving Hurricane Katrina rebuilding. In a letter Monday, acting FEMA administrator Nancy Ward said the agency would work toward finding a "reasonable resolution" with him and other Louisiana lawmakers who have expressed concerns.

With hurricane season starting June 1, Vitter was drawing growing criticism from groups such as the American Red Cross, as well as Republican lawmakers and the White House. The tactic also had become an issue in Vitter's 2010 reelection bid, with the Democratic Senatorial Campaign Committee using it to attack him as reckless.