Gay marriage may give Democrats an edge 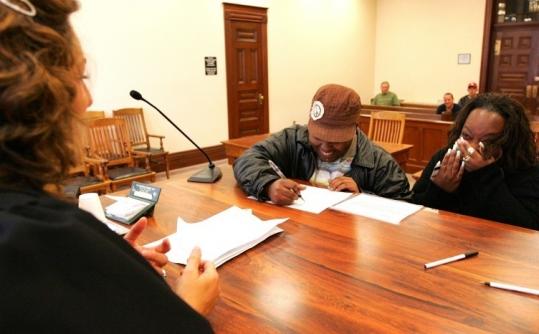 Veronica Spann (left) and Kentaindra Scarver were emotional as their marriage waiver was approved in Iowa on April 27. (Jeremy Portje/ Telegraph Herald via Associated Press)
By Liz Sidoti Associated Press / May 3, 2009
Text size – +

WASHINGTON - Gay marriage legalization in several states and the public's growing acceptance of same-sex unions have Democrats sensing political opportunity and some Republicans reevaluating their party's hard-line opposition to an issue that long has rallied its base.

In recent weeks, Vermont and Iowa legalized same-sex marriage, while New York, Maine, and New Hampshire have taken steps in that direction. Polls indicated that younger Americans are far are more tolerant on the issue than are older generations. For now at least, the public is much more focused on the troubled economy and two wars than on social issues.

In addition, over the past decade, public acceptance of gay marriage has changed dramatically.

A Quinnipiac University poll released last week indicated that a majority of respondents, by a 55-to-38 percent margin, oppose gay marriage. But it also found that people, by a 57-to-38 percent margin, support civil unions that would provide marriage-like rights for same-sex couples, indicating a shift toward more acceptance.

With congressional elections next year, Republicans, Democrats, and nonpartisan analysts say the changes benefit Democrats, whose bedrock liberals favor gay unions, and disadvantage Republicans, whose conservative base insists that marriage be solely between a man and a woman.

"This is not a sea change. This is a tide that is slowly rising in favor of gay marriage," creating a favorable political situation for Democrats and ever-more difficulty for Republicans, said David McCuan, a political scientist at Sonoma State University in California.

Democrats have a broader base filled with more accepting younger voters, as well as flexibility on the issue. Hard-core liberals support gay marriage, while others, including President Obama, take a more moderate position of civil unions and defer to states on gay marriage.

Conversely, the GOP base is older, smaller, and more conservative. Republicans have no place to shift on the issue but to the left, because the party has been identified largely with its rock-solid opposition to gay marriage and civil unions. Also, the GOP has no titular head setting the tone on this or other issues.

In recent months, proponents have used state legislatures and court challenges to legalize gay marriage, mindful that the majority of the public still isn't supportive and successful ballot measures would be less likely.

Because of high court rulings, gay marriage now is legal in Iowa, Massachusetts, and Connecticut. A Vermont law allowing gay marriage will take effect in September. New Hampshire and New Jersey, where same-sex couples can enter into civil unions, are considering gay marriage legislation. So are Maine and New York.

Political insiders no doubt will pay close attention to developments in Iowa and New Hampshire, early presidential voting states, to see how the issue plays out in the run-up to the 2012 presidential election.

Despite the changes, opponents are buoyed by a voter initiative in California that blocked the state from allowing gay marriage and by the 29 states where voters have approved state constitutional amendments banning gay marriage.

For years, the GOP and its conservative base has used its opposition to gay marriage to drive Republican turnout in elections and marginalize party moderates. Measures defining marriage between a man and a woman that were on ballots in a slew of states in 2004 were widely credited with boosting the number of conservative voters, giving Republican George W. Bush an edge over Democrat John F Kerry.

But there has been conflicting evidence since then over just how much that contributed to Bush's victory.

What is certain is that opposition to gay marriage for decades has been a potent tool for the GOP in rallying social conservatives. They are critical to the party's grass-roots organizing and small-dollar fund-raising.

But as more states accept gay and lesbian unions, there is a debate inside the party over how it should position itself on the issue. The dispute is just one part of a broader struggle within the out-of-power GOP over its identity and whether it should focus on rallying conservatives or attracting supporters from across the political spectrum.

Some prominent Republicans are backing away from cut-and-dried opposition, and some party operatives say it's only a matter of time before others follow suit because the country is changing.