Thousands in US protest tax day with 'tea parties' 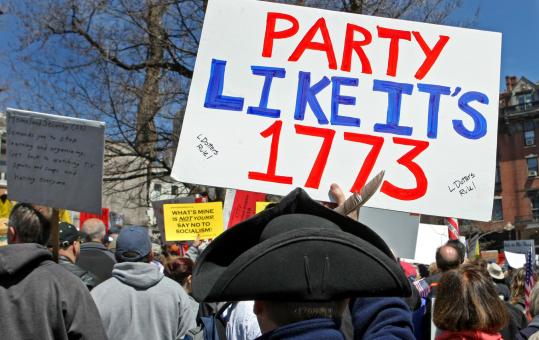 FRANKFORT, Ky. - Whipped up by conservative commentators and bloggers, tens of thousands of protesters staged "tea parties" around the country yesterday to tap into the collective angst stirred up by a bad economy, government spending, and bailouts.

The rallies were directed at President Obama's administration on a symbolic day: the deadline to file income taxes. Protesters even threw what appeared to be a box of tea bags toward the White House, causing a brief lockdown at the compound.

Shouts rang out from Kentucky, which just passed tax increases on cigarettes and alcohol, to Salt Lake City, where many in the crowd booed Governor Jon Huntsman, a Republican, for accepting about $1.5 billion in stimulus money. Even in Alaska, where there is no statewide income tax or sales tax, hundreds of people held signs and chanted "No more spending."

In Boston, a few hundred protesters gathered on the Common - a short distance from the original Tea Party protest in 1773 - some dressed in Revolutionary garb and carrying signs that said "Barney Frank, Bernie Madoff: And the Difference Is?" and "D.C.: District of Communism."

The tea parties were promoted by FreedomWorks, a conservative nonprofit advocacy group based in Washington and led by Dick Armey of Texas, a former Republican House Majority Leader who is now a lobbyist.

While FreedomWorks insisted the rallies were nonpartisan, they have been seized on by many prominent Republicans who view them as a promising way for the party to reclaim its momentum.