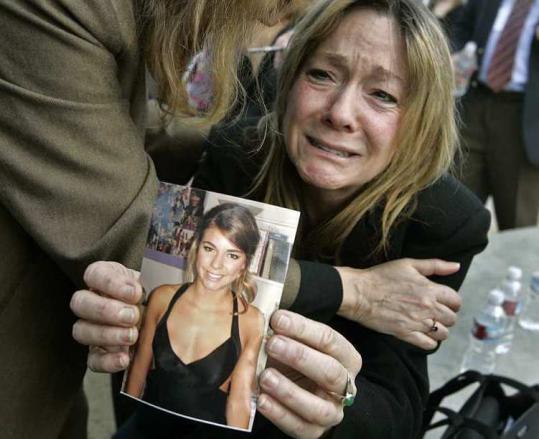 LOS ANGELES - A driver hit two University of Southern California freshmen - killing one - and driving off with the other caught on the hood until stopping to let a passenger out to pull the wounded student off the car, police said yesterday.

Adrianna Bachan, 19, of Santa Barbara, was killed and Marcus Garfinkle, 19, of Scottsdale, Ariz., was seriously injured at about 3 a.m. Sunday when the motorist ran a red light and struck them just north of the campus.

Garfinkle was pulled off the car and the passenger got back in and it drove away. It was unclear how long Garfinkle was on the hood or how fast the car was going.

"He was heartless, lacked courage, had no regard for human life. This individual should certainly be behind bars," police Detective Jimmy Render said yesterday at a news conference.

No arrests had been made yesterday.

Garfinkle was in serious but stable condition yesterday, officials said. His injuries were not specified.

Police said there were four or five witnesses to the hit and run, which occurred as the students were returning to campus after attending fraternity parties in the neighborhood.

None of the witnesses saw the car's license plate.

Police hoped the public or a car-repair shop worker might spot the vehicle, which has a cracked windshield and a damaged front end.