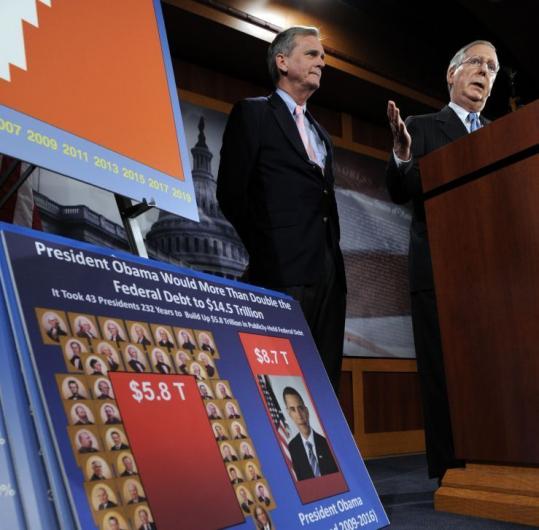 Since giving Obama the heave-ho last month, Gregg has been one of the Democratic president's harshest critics. In recent days, he has been blasting Obama's proposed $3.6 trillion budget, saying it would bankrupt the country. Gregg, the ranking Republican on the Senate Budget Committee, got some more ammunition Friday, when the nonpartisan Congressional Budget Office projected that Obama's plan would generate unsustainable deficits averaging almost $1 trillion a year for the next decade.

In an interview on MSNBC yesterday, Gregg said if he were in charge, he would excise from Obama's budget the healthcare expansion ($634 billion over 10 years) and the government takeover of student loans, would freeze discretionary domestic spending, and would tackle entitlement programs such as Medicare and Social Security.

He also stood by his eye-opening remarks about the moves by some Democrats to limit debate - and require only a bare majority for passage - on major tax proposals in Obama's budget plan, including carbon and healthcare taxes.

While Democrats say that Republicans did the same when they were in control, Gregg and other Republicans say that puts a lie to Obama's pledge of bipartisanship and changing how Washington does business.

Frank believes laws aiding transgenders to pass soon
Representative Barney Frank of Massachusetts, one of a handful of openly gay members of Congress, says he believes that Congress will soon pass laws protecting transgender people from hate crimes and granting them benefits. He also said that he's hopeful that President Obama this year will overturn the "don't ask, don't tell" policy on gay members of the military.

But he told the website gay365.com that he doubts that the law defining marriage as between a man and a woman will be overturned. And Frank said he doesn't believe the Supreme Court will declare the Defense of Marriage Act unconstitutional, either, using a harsh description of Justice Antonin Scalia.

"I wouldn't want it to go to the Supreme Court now because that homophobe Antonin Scalia's got too many votes on this current court," Frank said in a remark first reported yesterday by the political blog of USA Today.

Also, Frank said the attention he is getting on the economic crisis as chairman of the House Financial Services Committee helps the gay community because his personal life has not been a "hindrance" to being trusted by the president and others.

N.E. legislators support Navy destroyer project
New England members of Congress are banding together to protect a new Navy destroyer program that promises jobs in the region but could be on the chopping block.

Senators Edward M. Kennedy and John F. Kerry of Massachusetts, and Jack Reed and Sheldon Whitehouse of Rhode Island, along with some House colleagues, sent a letter to Defense Secretary Robert M. Gates urging him to support full funding of the DDG-1000 destroyer in the president's budget.

The new destroyer would be built at the Bath Iron Works in Maine and a second shipyard in Mississippi, while contractors in Rhode Island and elsewhere would supply components.

White House to put tickets online for Easter egg roll
The White House announced yesterday that for the first time, tickets to the annual Easter egg hunt April 13 will be distributed online Thursday through its website "so that more children and families from across the United States have the opportunity to experience this event."